With the advent of low-cost carriers offering such low fares from Australia to Asia, the question of “are full-service carriers really worth the extra (or sometimes double)   fares?”  lingers

I’ve always believed that you get what you pay for, and when I flew Air Asia 5 years ago from the Goldcoast to Sydney, I vowed to NEVER EVER EVER fly a low-cost carrier ever again.

So for our trip to the Philippines and Malaysia this year, we took Malaysia Airlines. And I’m relieved to report that despite a few eyebrow-raising moments, flying a full-service carrier still is very much worth it.

I’m definitely not small-framed. I’m 5’5 and I found that the Economy seat’s leg space was very comfortable. I even managed to put my bag underneath the seat in front of me and still had my legs slightly splayed out. It does help if you know the person you’re sitting next to, as it plays a big factor in your comfort. (ie not being conscious of private space, etc). The plane layout was 2-4-2 and we were nicely seated in one of the ‘2’. 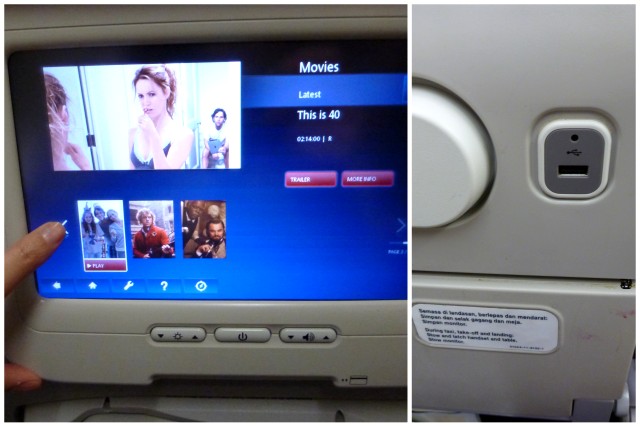 All Entertainment systems were touch screen, and also had the option of being controlled from the armrest controller. I found the touchscreen easier. It had great sensitivity, and didn’t require me knocking the head of the passenger sitting in front just to press play (as I know of some other carriers). I also liked that each seat came with a USB port. perfect for charging your phones and cameras on a long flight!

while the movie selections are recent and plenty, the game selection was very dated and slow. I remember playing this HangMan game from the 90’s, out of a chunky IBM that played 5 midi sound notes. I suggest you stick to watching the movies and tv shows. 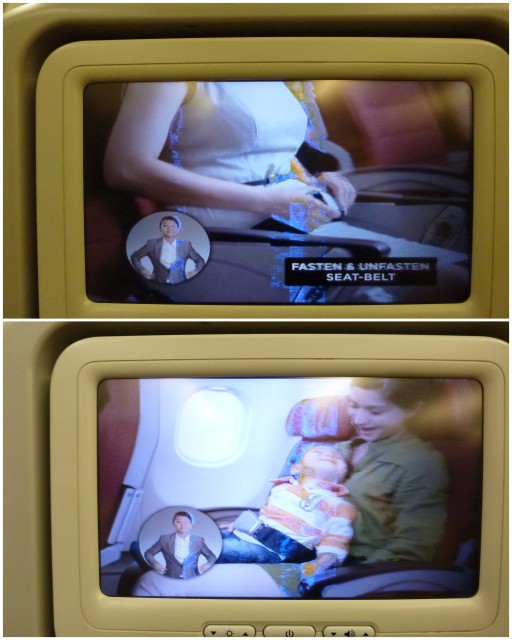 I know this is probably the least of your concerns when flying (the video itself, not the safety issue) but I thought I might just point out that at this time when major airlines all take the opportunity to make their in-flight safety videos catchy and marketable, (such as Air New Zealand’s Hobbit-themed one!)- Malaysia Airlines makes its safety video very basic and plain. The insert circular clip of a female interpreting for the hearing-impaired has a slightly 80’s feel to it.

Ok, for the sake of comparison and to cater to a broader audience, I decided to pre-book a Gluten-Free meal for myself , and had Zombie go with the normal in-flight meals.

We took a night flight so this was dinner. Although I was first tempted by the aroma of the chicken curry (which was abit too spicy for my taste), I decided the Gluten-Free meal won this round. I am a seafood lover so hands-down the fish takes the cake! It may be bland but it didn’t bother me (I’m not too fond of seasoning anyway). The meal came with a flourless chocolate cupcake.

The 8-hour flight had 2 meal services. So come early morning as we were nearing Kuala Lumpur, breakfast was served. And this is when things turned pear-shaped for the Gluten-Free team. 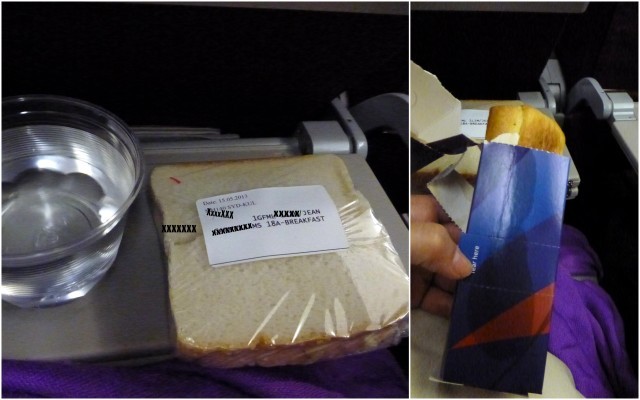 The regular meal folks were given a curry roll. (right) While it was hot, it was rather tasteless and starchy. Then for the Gluten Free breakfast (left), a stale bread with 2 pieces of dehydrated vegetables for filling. I kid you not, the bread was rock-hard. It wasn’t even frozen or anything, it was just stale. I wish I could show you how hard it was (it would hurt if I smacked you on the face with it LOL) but I didnt bother taking a video. It was just impossible to eat it. Zombie and I halved the normal curry roll.

But here’s the more interesting part. On my flight back from Kuala Lumpur to Sydney, here’s what I got for breakfast:

Now on this flight back, I flew alone so I didn’t get the chance to steal or share someone’s normal breakfast (I espied the lady next to me unhappily gnawing on the same crusty roll anyway). Now you know that I’m not a “real” Gluten-Free passenger, I just wanted to see what they had. But if you were Really Gluten-intolerant and you were on this flight, I feel very sorry for you. With so many gluten-free breakfast choices (whole grain cereals, hommus and vegetable sticks, etc), why play zero effort and just hand out apples? 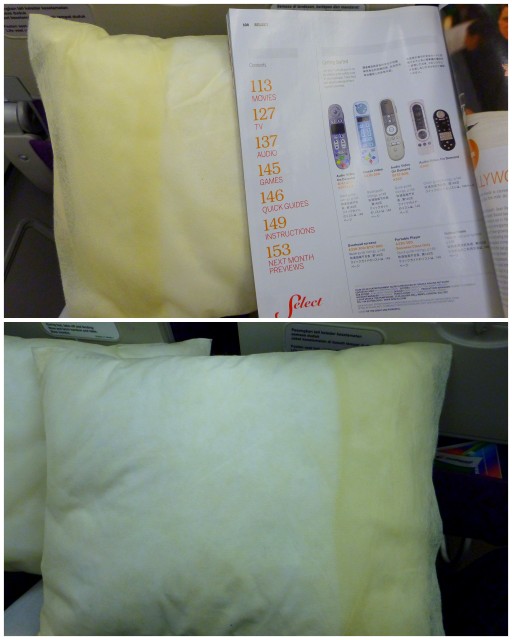 I was aghast when I first sighted these pillows. Will you really rest your head and face on that yellow, sweat stained square puff? I took a photo next to a real white colour (the magazine page). And then later on realised that it was the normal colour of the pillow cover. It wasn’t dirty. They were brand new, clean and in the spankin’ new shade of “collarneck stain” yellow. It’s almost like a practical joke, or a tactic that I would use if I had unwanted guests at my house.

The cabin crew were all polite. Not rude but lacking in warmth. Whenever I asked for a cup of water, I would be faced with a curt nod and handed the water wordlessly. On my return flight, the lady next to me asked for socks and the crew looked at her with pleading eyes that said “must you really ask for that??” and again, wordlessly and promptly got the socks and left. The male cabin crew seemed to have more personalities in the flights I had. On our Sydney- KL flight, Zombie’s screen was busted. When he raised this concern to a female cabin crew, he was just told “ok”  but nothing happened. Later on Zombie told a male cabin crew , who happened to be just passing by. The crew tinkered with the screen and although nothing happened, he apologised for it, tried to reset part of the entertainment system. When that still didn’t work, he apologised again and offered Zombie if he wanted to sit in an extra empty chair way over at the back of the cabin. Though Zombie didn’t take up this suggestion, the crew at least made an effort and offered a solution.

This is where Malaysia Airlines gets the biggest nod of all: a very generous 30 KILOGRAMS per passenger, on Economy class. Enough said. 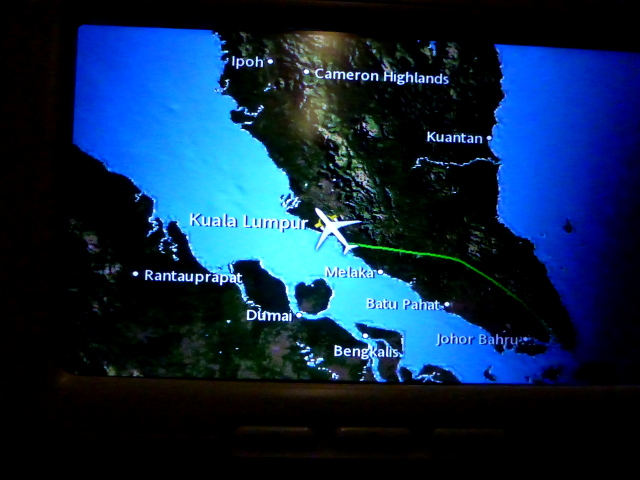 Whenever you fly economy, no matter what airline, one thing’s for sure: That blinking plane could never get into that destination dot fast enough. No matter how hard you stare at it.

The drawbacks I enumerated above are all slight bumps compared to the headaches of booking low-cost carriers. I will still take Malaysia Airlines when we go to our respective family roots next (Philippines and Malaysia).

Unless you had 3 or 4 seats all to yourself in economy, there really is no other way to feel lavish in it after an 8 hour flight.

And touchdown at 4 AM in Kuala Lumpur International Airport sees me looking all delightful and chirpy:

WHAT TIPS HAVE YOU GOT FOR STAYING FRESH AS A DAISY AFTER A LONG-HAUL ECONOMY FLIGHT?