Travel + Leisure recently published their ‘World’s Best Awards 2013’. They listed what their readers deem to be the world’s best cities, hotels, spas, islands, cruises, and others.

Being an island and underwater lover, I of course paid attention to the World’s best island list. The whole list can be viewed here but here’s a snippet: 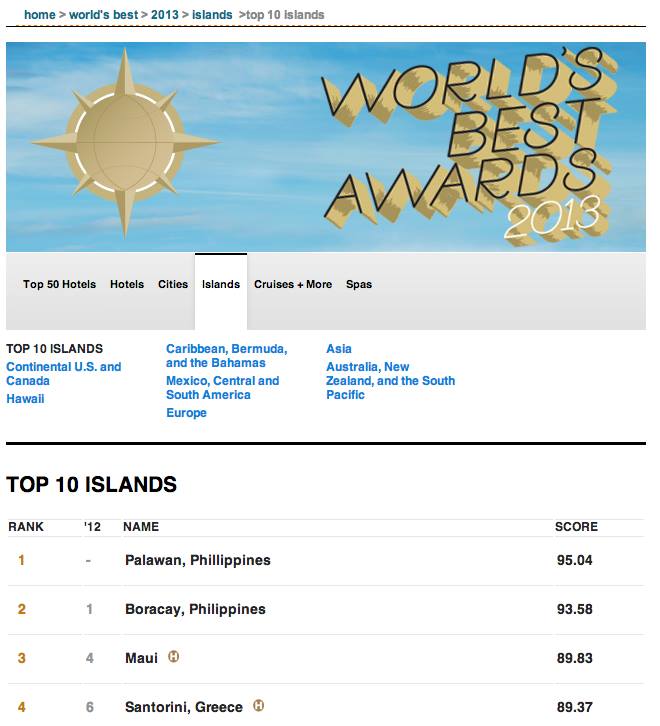 When I saw Palawan topping the list, I felt really proud ! Not just because I’m originally from the Philippines, but I am truly, madly , deeply in love with Palawan. Is it world’s number 1 island for me? I don’t know, I’ll get back to you on that when I’ve explored ALL the islands in the world! All I know is that my time in Palawan was supercalifrajamazing!

and then I saw the island that was ranked number 2, Boracay. I know, I know, beauty is in the eye of the beholder but…er, I really want to know what the beholder was on to love this:

I’m not a Boracay-basher. It used to be my one true love! And so the hurt cut deep when I returned to it in such a state.. And yes, yes perhaps the beholders stayed at the Shangri-la Boracay. But I believe we are ranking islands, not hotels. The best island should be enjoyed by everyone, regardless of where they stay , such as Palawan.

Anyway, I understand the importance of yearly lists. People who do not have time to research extensively rely on it where to go. But my problem with lists is that it encourages a culture of ‘what’s hot/what’s not’ among islands, cities and countries. So when Boracay was listed as world’s number 1 island in 2012 by Travel + Leisure, I can only imagine the surge of tourists who came to the island. Tourism is not bad. It means the place is a-buzzing! Locals have jobs! But when a lovely island becomes over-commercialised to accommodate or attract more tourists, that’s when things turn sour.

Yes I encourage you to enjoy the lists, read them. Use it as a guide to determine where to go. But make sure you research independently too. And the most important thing that I wish to say is, go beyond anybody’s list. Create your own and have fun exploring lesser known places!

While some of the best places I’ve been to are still unheard of, the other best moments too have been in ‘bucket-list’ stereotype places where the hype is definitely real, and more.

Don’t snub a place just because you haven’t heard of it yet or because it’s unpopular. But don’t avoid places too just because you think ‘everyone’s been there already!’ Neither should you just limit your travelling to places that are high up in the ‘cool’ list.

In other words, when being a traveller– be open to all places. This way if everyone travelled equally to all places, no island will be overcrowded.