There’s always something magnetic about every place when the sun goes down. While the sparkle of  glaciers during the day can captivate you, Iceland during night time is certainly something else.

It had been raining and cloudy, so while we knew we weren’t going to see the Northern Lights that night, we were thrilled that Arctic Adventures still went ahead to pick us up for lobster diner and caving.

Gilli, our guide, picked us up from our hotel and informed us that Zombie and I were the only people on the tour.

This is because everyone else backed out when they learned that Northern Lights was a no-go that evening. We didn’t want to waste our limited evenings so we still went ahead, and I’m so glad we did.

Because the evening turned out to be the most magical and eeriest ones I’ve had in a while.

First off, we headed to the village of Eyrarbakki.

In this village you can find Rauða Húsið, a seafood restaurant which means “Red House”

Inside is very cozy and has such a homey and romantic feel to it. Save for a group of people in a separate function room, we were the only ones there as it was a rainy night.

A cold rainy night + seafood + good company , we were off to a marvelous start! It was a 3-course dinner of fresh bread with spreads as entree, and a plate of lobsters with salad for mains, and belgian waffles with ice cream for dessert.

They are a smaller breed, these Icelandic lobsters. But probably the sweetest, most succulent ones I’ve ever had!

It was the most wonderful dinner, my favourite meal in Iceland so far.

By the time we finished dinner, the night was at it’s darkest.

Perfect time to explore the “underworld” of Iceland….

We hopped back into the van and Gilli drove deeper into the darkness, searching for that ‘spot’ to explore.

Bear in mind that this is well outside any city in Iceland, we were driving among lava fields and it was the blackest night I’ve seen. The wind was howling. It was raining.

And just when I felt like curling up within the safe and warm confines of the van, Gilli said “Ok this is it! Let’s go.”

Yes it was very cold and wet. And while walking and searching for the caves, I sometimes felt my body sway from this to that side because of the winds. But I was so excited to see what the caves held for us.

After about a 3 minute walk, we found the area.

Armed with our helmets and headlamps, we stopped in this area. Once we made that initial descent, the noise and the howling winds stopped and the rains eased.

I know it may be hard for you to imagine this, but the dark and unknown cave offered a comforting respite. 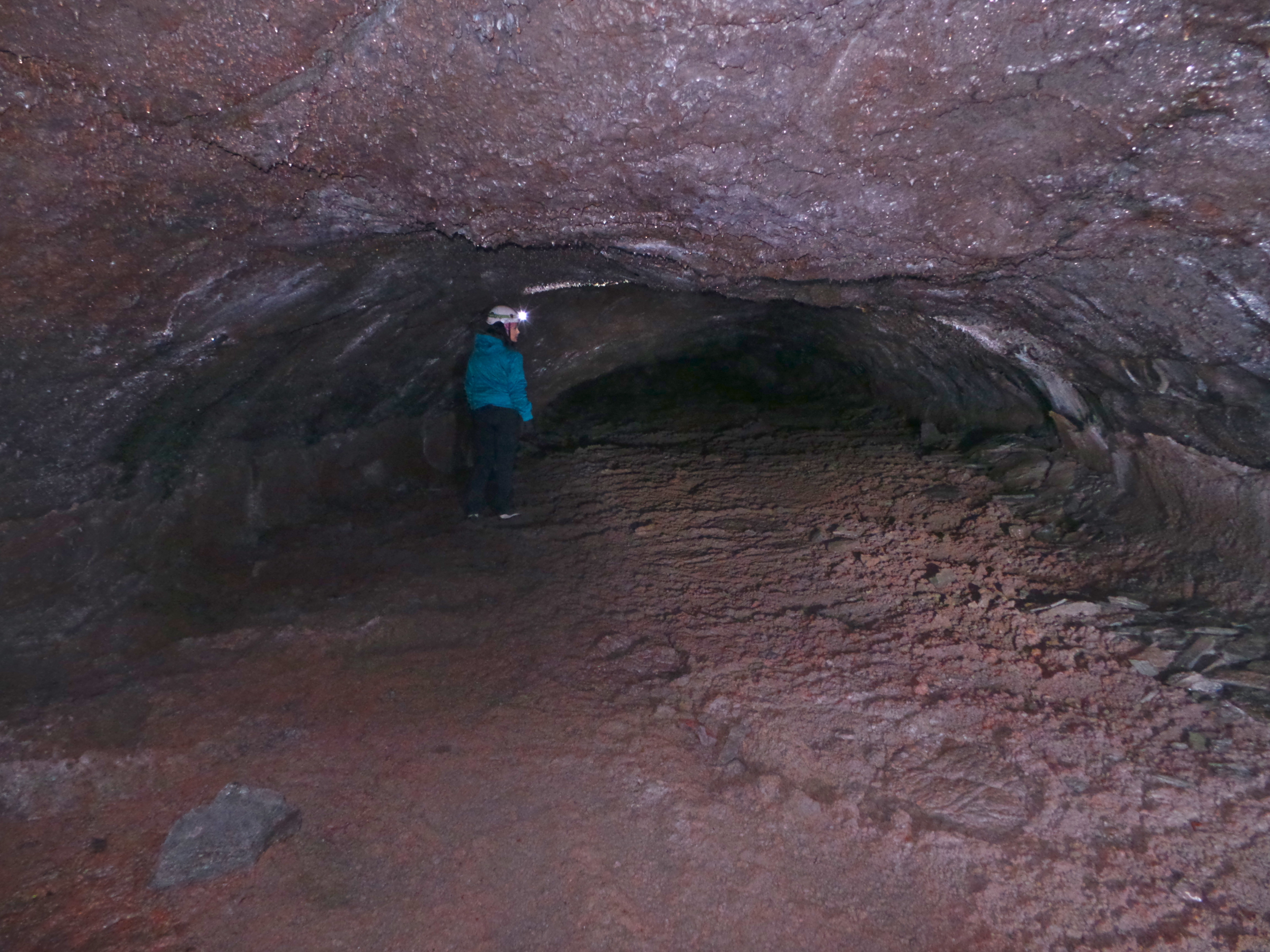 The most noticeable thing is that the cave walls are a deep rich red. These are lava caves!  And while the cave “ceiling” had water drippings (the cleanest, freshest water), the cave floor was dry. Because the cave is very porous. It doesn’t hold water so there are no slippery pools in the dark.

There were so many corners and alleyways to explore inside the cave, it was almost tempting to wander off alone. You of course, must not do this!

Along with interesting rock formations, there were so many interesting things to see along the way. The most bizarre sighting for the night was the remains of a sheep/wild goat. Estimated to be thousands of years old. One can only guess that the sheep/goat was running away from a predator, took refuge in the cave, and died there.

When we reached the darkest and deepest part of the cave, Gilli asked us to sit among the rocks.

Zombie and I settled comfortably, with Gilli sitting in front of us. Then he asked us to switch off our headlamps.

The only sound I could hear were tiny water droplets. Everything around was pitch black.

And in the dark, I heard Gilli’s voice ask, “Would you like to hear a story?”

A long long time ago, as settlers in Iceland started to build their society , they also faced the same problems as we do now: Thieving, looting, crime.  As hunting parties grew in search for the suspects, the caves also offered the perfect hiding place for the hunted.

The people who took refuge inside the caves soon realised that as long as they don’t go out of the cave, they will be safe.

And it was in these caves that they built their new lives, they had families, children, and thrived inside the dark.

Through the generations, the physiology of their bodies also changed. The human body adapted to the darkness.

They soon lost their eyesight, as there was no need of it in the dark. Their hearing became a thousand times more defined and sharp.

The way they moved also changed. Instead of standing and walking, crawling became easier and more natural.

And to adapt to the damp and cold environment, their skin developed scales.

And this is the story of Iceland’s  huldufólk (hidden people) .

After a long pause, Gilli said “And at the count of 3, I want you to switch your lights back on.”

If I may speak frankly, I hesitated big time in switching my headlamp on.

The eerie silence and the dark plays games in your head.

And Gilli is such a convincing and moving storyteller, I was afraid of what my eyes would see. I was half-expecting Gilli himself transformed into a huldufolk!

To my utmost relief, everything was normal. Gilli’s friendly face loomed before us.No sign of scales. WHEW! 🙂

Tell you what, this was much better than all of the ghost tours Zombie and I have gone to!

When we emerged out of the cave, it was almost strange to see everything as it was. The wind and rain died down abit, the van was there waiting for us. We felt like we’ve been in the cave for ages but only 2 hours or so had passed.

Was that a super magic black hole?

No,  just a cave in Iceland. And we know that caves in Iceland are somewhat magical, right?

A nice seafood dinner, talking with Gilli who is so passionate about nature, photography, and his country, and then exploring the lava caves, and getting to know Iceland’s folkloric stories in the dark, no less!

This is easily one of mine and Zombie’s most unforgettable evenings.

A big thank you to Arctic Adventures who hosted us for the evening on their Northern Lights Hunt tour.Weather permitting, this tour normally includes a sighting of the Northern Lights.