We live in fast and modern times where flying is considered a normal and regular way to travel.  Frequent travellers are used to flying several times a week / month, that its easy to forget that flying is truly one of the most amazing engineering feats man has achieved.

So whenever a new aircraft is manufactured, I’m very curious to know what the world’s latest technology can carry out.

The Dreamliner, Boeing 787  is Boeing’s latest commercial aircraft creation. Last June 2014, the 787 have operated over 100,000 commercial flights, and carried over 20 million passengers.

I recently had the opportunity to fly the Dreamliner with Jetstar Australia on their Sydney – Bali (Denpasar) return route.

I flew economy on the way over, and business on return.

In a nutshell, I can dare say that the Dreamliner is the first “smart plane” in the world of aviation.

The first thing I noticed about the Dreamliner were the span of it’s wings. It also has a graceful angle, giving it an almost birdlike appearance.

Soon. I am to find out that the wing design is not just aesthetic. ( I will revert back to the wings’ shape later as they play such an important part)

I do have to say, boarding the 787 has a mini- WOW effect.  Apart from the fresh smell of a new aircraft, the ceiling is noticeably high so you don’t feel closed in, (or feel like entering a cave as other aircraft can make you feel) and the entrance also has a cathedral- like domed ceiling.

I did feel the extra padding on the seats and the smart head rest (the sides of which fold), were really helpful.
There are 314 seats on economy on a 3-3-3 configuration . The seats have a 30-inch pitch and 5 inches of recline.
As I was seated on a bulkhead seat, I felt quite comfortable and was able to stretch my legs, which is a main factor in having a relaxed flight

The business class cabin has 21 seats on a 2-3-2 configuration. I am seated at 3J (the last row) , having requested a window seat. I later find from Seat Guru that 3J and 3K are the best seats in Dreamliner’s business class as they have 2 inches of extra recline, as it is used for crew rest on some flights.

The recline was indeed very comfortable, and I fell asleep midway through a movie and woke up only when preparation for landing was announced.

All seats on both business and economy have seatback in-flight entertainment screens.

I had a bulkhead seat on economy so the Entertainment System was stowed under the armrest. Unless you have pre-paid for In-Flight Entertainment, you need to swipe your credit card to use it (AUD 6.00 a movie)

Each seat gets its own 10.6 inch touch screen. I love that it is a gate-to-gate viewing (meaning you don’t need to wait after take off to start viewing, or have to cut your movie short when landing). Entertainment system is free on all business class seats.

I settle in to watch The Great Budapest Hotel after hearing a lot of recommendations.

A quarter through the movie, the seat-belt sign flashed, and the captain announced turbulent skies ahead. I braced myself for the usual rock’n roll ride.

There were a few bumps, yes but you’d hardly call it turbulent. I still waited and waited…

That was it! We’ve gone through turbulence and it was hardly felt.

This is where the design of those graceful wings come to work. (This plane is not just a pretty face!)

The 787 is equipped with a system that detects turbulence and commands wing control surfaces to counter it, therefore smoothing out the ride.

On my flight back to Sydney (on business class), the passenger next to me did the biggest pet peeve ever: He took his shoes off, and he wasn’t wearing any socks. Double scoff!

I looked at my amenity kit, saw earplugs and wondered if I could wedge them inside my nostrils.

And before I could even register the hilarity (or necessity!) of this thought, the smell was gone. Like completely gone.

I thought the man had senses to put his shoes back on. I took a quick glance to see him still barefoot and sleeping like a log.

My sanity was saved by Dreamliner’s Filtrated Air System.

Fresh air is introduced into the cabin via air scoops on the side of the fuselage. Newly introduced on the 787, an additional gaseous filtration system removes odours, irritants and gaseous contaminants, some of the primary contributors to throat, eye and nose irritation

THIS! Is my ultimate favourite part of the Dreamliner. What a lifesaver. Not only does it come handy when the passenger next to you commits a faux-pas, but this system also saved my skin from being dry.

After mid to long haul flights, my skin is usually a map of dry flakiness especially around the nose area (and this is why I always take with me a small tube of moisturiser). However there was no need to do this on this flight. I didn’t even re-touch my makeup and still looked decent on landing– a rare feat especially on a red-eye flight!

This is a really marvelous concept introduced to an already smart plane.  2 years ago, I wrote a blog post on how to travel when you are sick and suggested that if you can, try postponing your flight because if you have colds or cough, it will only get worse due to the stale air inside the aircraft (not to mention you may contaminate hundreds others!).

I can now say that you won’t have any dry or extra irritated throat or nose when on the Dreamliner. I normally get the sniffles on flights that will be gone the moment I get out of the plane. None whatsoever on this flight.

This is the feature that I was most excited about. I love viewing landing sights (and have a photo collection of them too!) so having extra large windows ( 65% larger than comparable aircraft) was a plus for me.

But being large is not just the windows’ amazing feature.

Say goodbye to those moments during preparation for landing, when you’re still enjoying your snooze and the cabin crew wakes you up to pull the window shades up (or at least the sharp snapping sounds of the process of window shade shutting/opening wakes you up).

Because these windows will automatically go to clear mode on take off and landing.

Yes, the windows have 5 shades of dimming to your likeness. It goes from clear to almost opaque.

The large windows allowed me to take panoramic shots during landing such as these:

I also noticed that the aircraft ran quite smoothly. Even during take off , when the engines go on full throttle, the most you can hear and feel are rumblings and vibrations. This is not just convenient for passengers, but for people who live in the surrounding areas near airports as well.

The 787 uses up to 20 Percent less fuel than other aircraft of its size. The fuel savings doesn’t only mean that airlines can have the capacity for lower running costs (therefore possibly lower fares), but it also means the 787 is environmentally friendly as less carbon dioxide is produced.

Here’s a fact sheet about the Dreamliner: 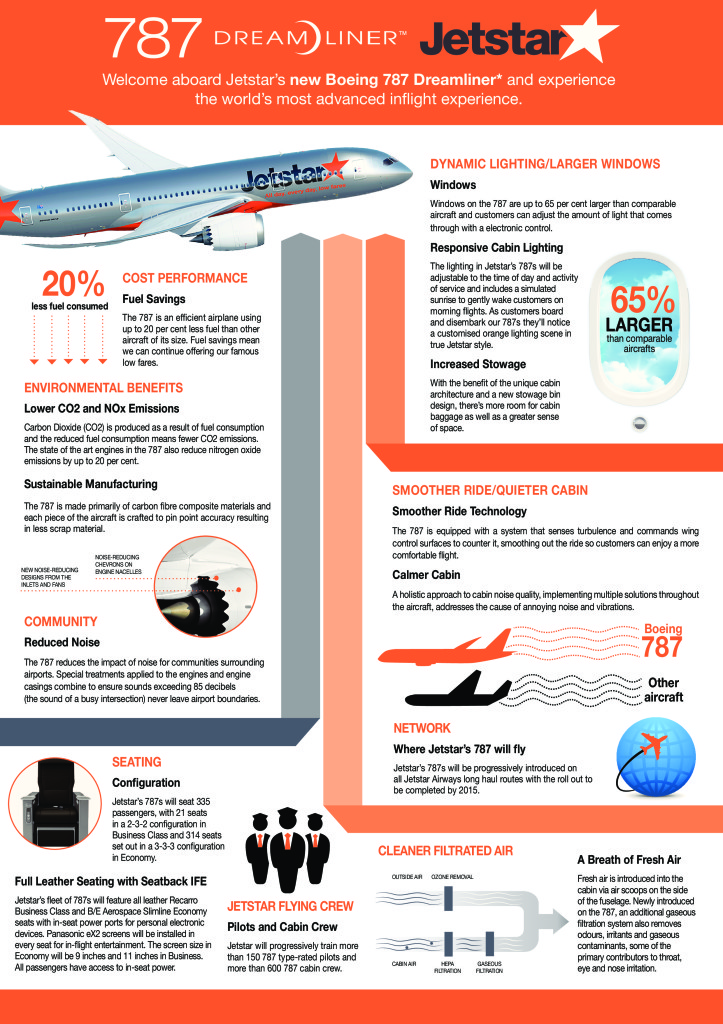 I never used to be particular about aircraft and thought that those who choose their flights based on the aircraft type were ‘petty’.

With 20 airlines (and counting!) now flying the Dreamliner, the 787 has flown more than 100,000 revenue flights and I know that I will proactively choose a flight on this aircraft if there was an option.

The Dreamliner is an aircraft that looks after both the health of passengers and the health of the environment outside. All that while being easy on the eyes.

I flew on the Dreamliner to Bali from Sydney as a guest of Jetstar Australia and Boeing, however all opinions and thoughts are my own.