You think you know Mexican Food? I thought I did. Many of us are familiar with Mexican food without even stepping foot in the country. If you grew up in the US, there’s a lot of Tex-Mex food (blend of Texan and Mexican ), and you will surely be familiar with Taco Bell.

Until I actually went to Mexico.

There is a huge, and I mean HUGE difference between the Mexican food that we know, and authentic , local Mexican food in Mexico.

Allow me put it this way: The foreign-Mexican food (the ones we normally know) have been, um, “pimped up” if I may say so. Oozing with creamy sour cream, chunky avocados, thick and prime cuts of meat. And due to this, I’ve come to crave Mexican food only once in a while. I feel overly saturated after having it.

But in Mexico, I ate Mexican food with gusto 3 times a day, everyday for 2 weeks.

The reality is, Mexican food in Mexico is SKINNY.

These flautas fast became Zombie’s favourite. And for someone who doesn’t even like cheese (can you believe it??), he’s looked for this dish whenever we ate.

The guacamoles we had can be runny (no usual chunks), the sour cream thinned out, and the bean servings barely a tablespoon-full.

And then I had this dish, which I chose because I like chicken breast and wanted to steer away from the fantastic deep fried dishes. I think that they added this heap of cheese serving to cater to tourists. Now I love cheese but this was abit too much, and when I stripped that layer of cheese off (as it hardened), this was one of the best chicken breast dishes I’ve had.

The meat was very lean, and the vegetables much smaller. But they were so fresh and light, I didn’t feel the normal nauseating side-effects after sitting on a usual Mexican dinner (outside of Mexico)

Back in the central district of Mexico city, we entered a local cantina and ordered Nachos. I don’t need to post a westernized Nacho dish for you to see the difference. Though I wasn’t too fond of the nacho chips itself – they were thick and bland but I guess this is authentic nacho chips without the usual preservatives, the guacamole itself was so light and fresh. Just a tiny sprinkling of cheese, no dollops of sour cream.

Notice the chicken dish that Zombie ordered. It looked like the chicken itself was on a Paleo Diet. No fancy embellishments there.

A side note: Even if I’m not too adventurous with food, I have a stomach of steel. Zombie had his bout of stomach issues even after sterilizing bottled water in Mexico. I accidentally drank tap water and was fine.

As we travelled further to the southeastern region of Mexico and reached the Yucatan region, the cuisine also changed drastically.

I discovered that Yucatecan food is really, REALLY good.

A long time ago, the Yucatecan Peninsula was far removed from the rest of Mexico, so the cuisine is very unique. There are touches of western influence (but not in the way I talked about). Just incorporating fruit in the dishes – using the method of marinating meats in orange juice.

The most distinct ingredient in Yucatecan food is Mole. An overly simplified definition of Mole sauce is a combination of sesame, chillies and dark chocolate. But in reality, a whole lot more goes into creating Mole.

And because we were in Oaxaca region, we got to try the most famous variation of Mole – Mole Negro Oaxaceno.

I enjoyed the dishes from Yucatan the most. They are not deep fried, and has less Spanish influence. The spices used are not the usual ones you find in Mexican food so it’s pretty unique and yes the Mole sauce made everything taste better too!

And the best Ceviche I’ve ever had was done in less than 5 minutes on board a whale watching boat. I normally don’t like ceviche (I like my food cooked with heat, not fruit acid), I happily ate this. I was so seasick when we went out to Isla Holbox to swim with the whale sharks.

When the guys prepared this, my seasickness was gone. Totally gone. Perhaps its the lime and coriander, but this batch was really good.

To the less adventurous ones, Cancun will be your respite. Offering mostly American food, there are tons of familiar chains like Bubba Gump, Outback, Hooters, etc.

The grocery stores and 7-11’s all serve American food. Being in Cancun felt like being in another US state.

I admit, when we were served the measly looking Nachos and Flautas on our first day, I laughed at how skinny the dishes were. I was used to the voluptuous version of Mexican food. The Hollywood kind.

And now that I know what real Mexican food is, I can say that I like the native and homeland version more. Where chicken parts are skinny – because this means the chicken wasn’t fed hormones.  And cheese and sour cream are served ever so sparingly because these are novelty products in a developing country. And as an offshoot result, they are overall a much healthier version of the Mexican food I’ve been having. 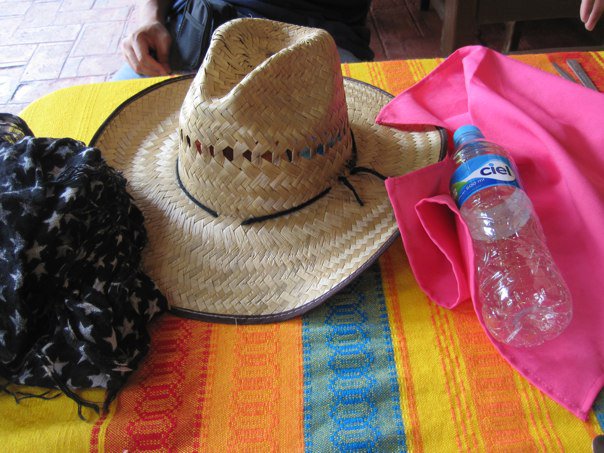 Have you ever been surprised by how different a certain food is in it’s home country?