This will be my last post about Cancun. I saved the best for last!

This place is about 2 hours away from Cancun. We took a day trip package that included entrance, meals, transport to and from the hotel, locker rentals, and ticket to the night show. In other words , the works.

I don’t even know how to begin describing this place. The things you can do there are a gajillion.
Animals, water, sports, culture, beach, food–it’s a must visit for when you are in Cancun.

You definitely need to have a map when you are inside. We explored the place independently. Some call this an artificial theme park. But it’s very well made. It doesnt feel contrite or forced. It’s just a very amazing place that I took the entire day to enjoy and appreciate. 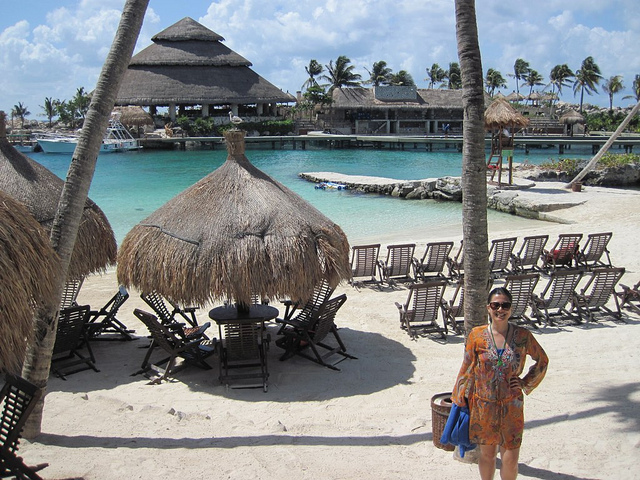 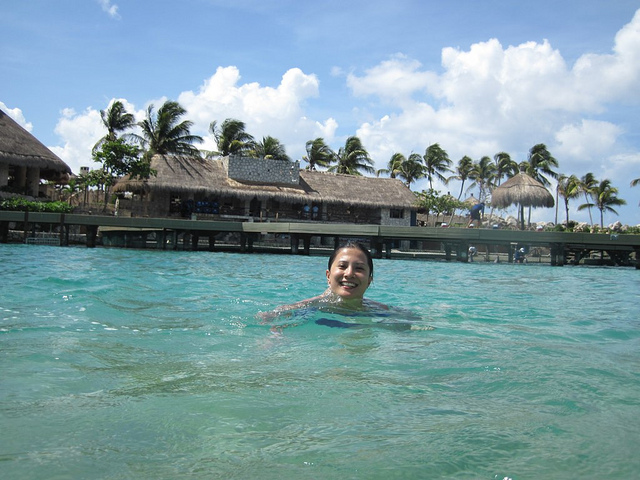 If anyone dares to say that the term Carribbean Blue is a hype, I will disagree. The Carribean waters are  a delight to swim in. Calm and warm!

Swam next to the dolphin enclosure, and without any prompting, they did this when they saw us on the other side of the fence 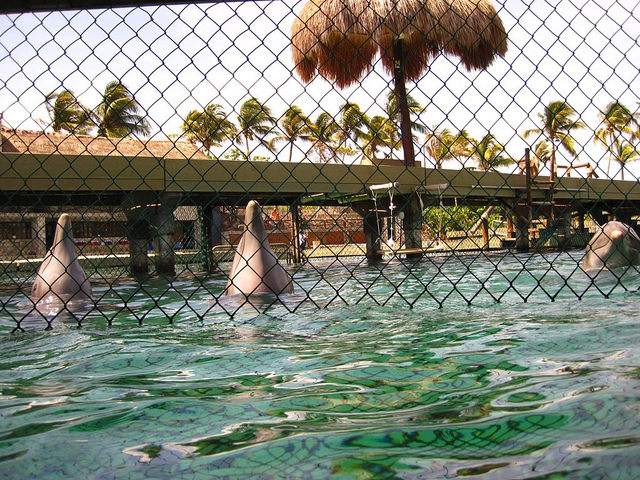 It was as if they were saying “Hola, what’s up? Que paso?”

Sooo cute! I soo wanted to tear that fence away and swim with them! Soooo close .

After the swim we headed up to explore some more of the land. We saw a group of schoolchildren on a field trip. 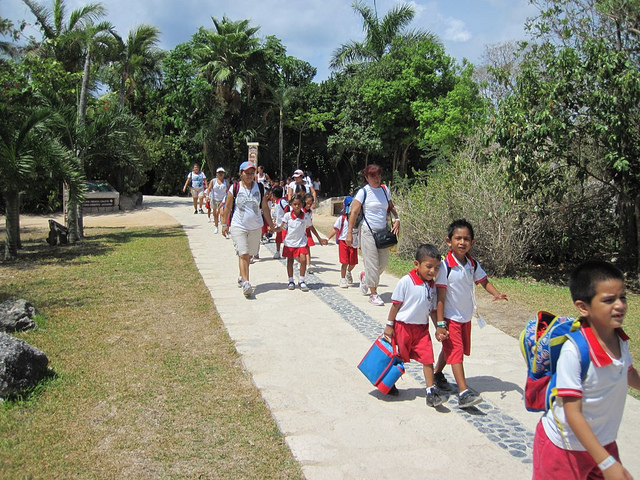 So this place is very kid and family friendly. Yet it’s not noisy or rowdy. Just the right mix of family and couples.

Then we decided to do a Snuba (combination of Snorkel and Scuba). I wasn’t certified yet last year so this was the best we could do. 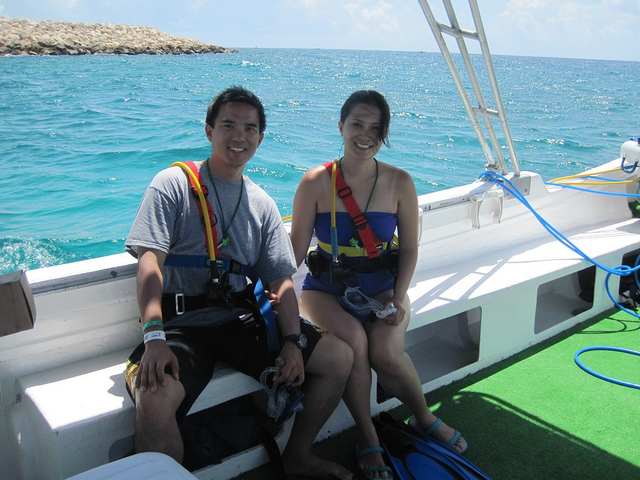 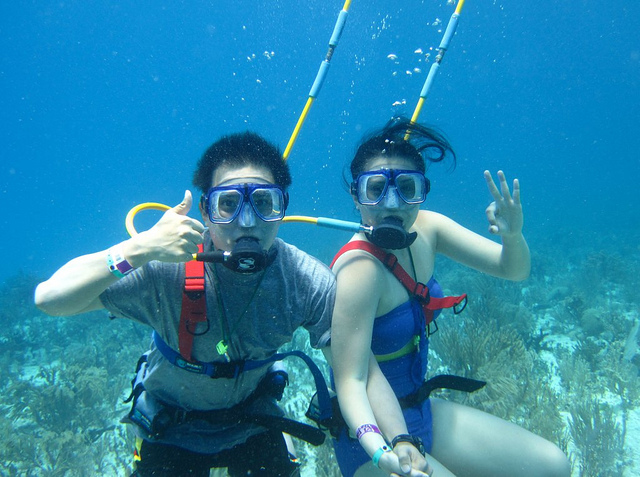 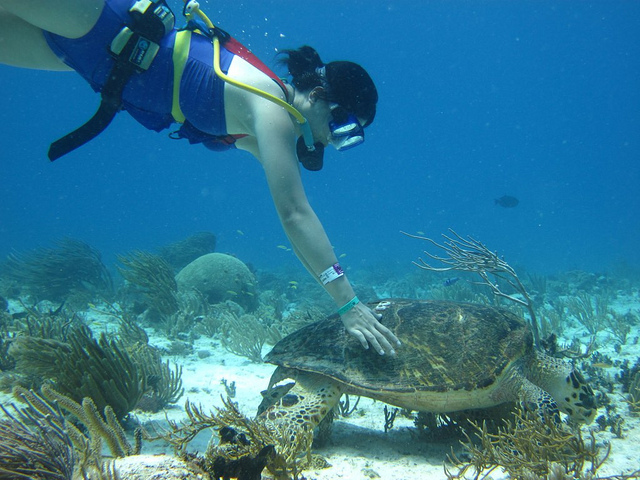 We headed back to the shore for our next activity. We wanted to swim with the sharks, but that was unavailable for the day. So we did the next best thing. Swam with Sting Rays ! 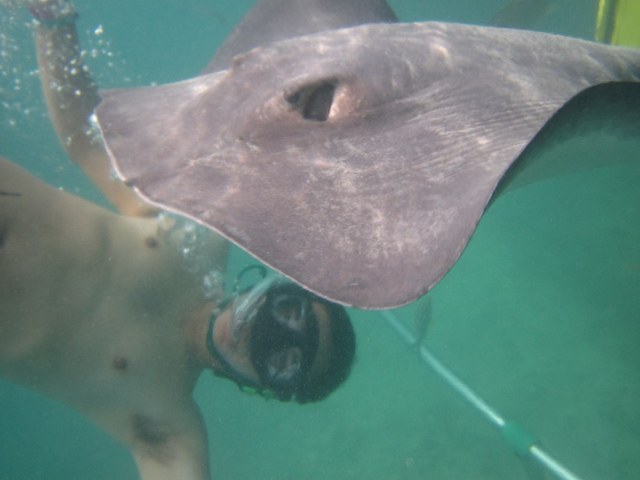 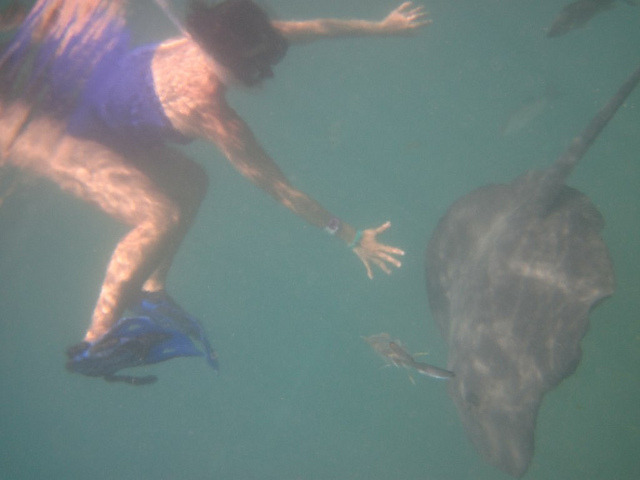 We were pretty hungry after that, so we had the most amazing (best meal in Mexico) buffet lunch by the water. We were so hungry no photos were taken of the food or the lunch but it was at that large hut to the left of this photo: 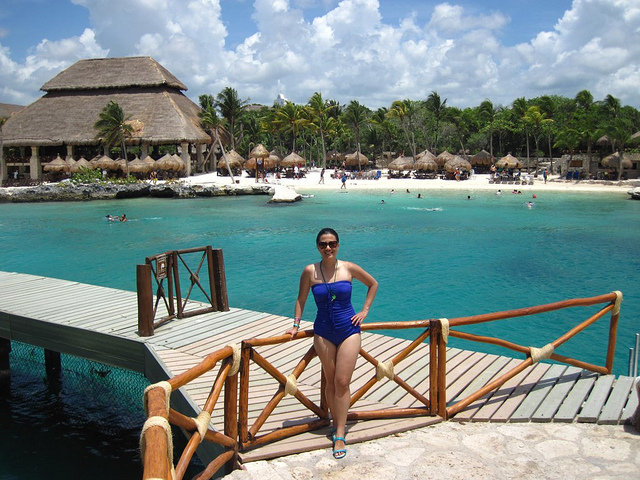 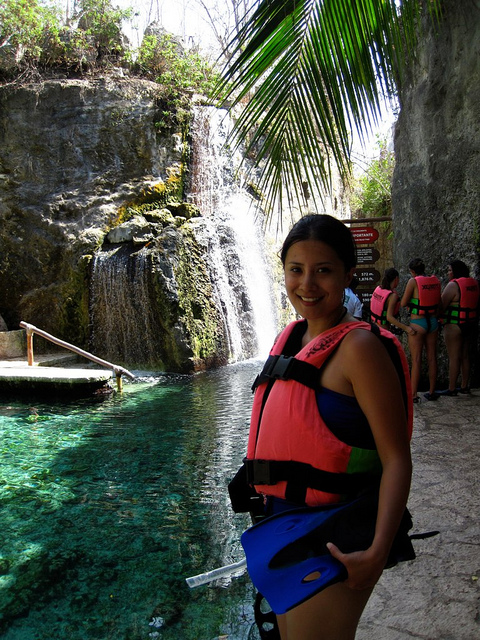 If that water looks freezing to you–you’re 100% correct. It was cold!! But turned out ok in the end when I got used to it, and it helped that the weather was quite hot. 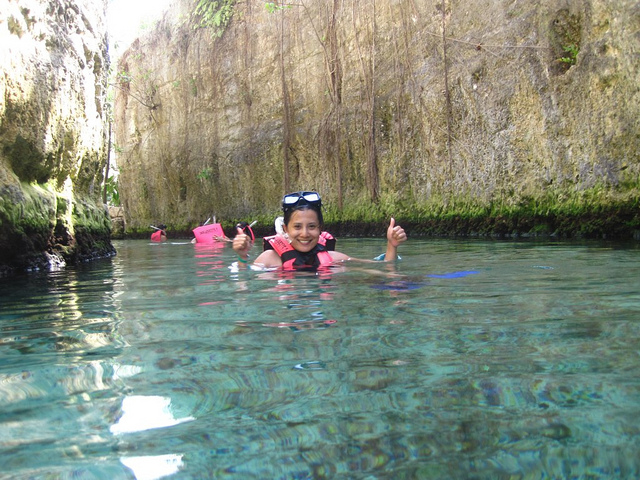 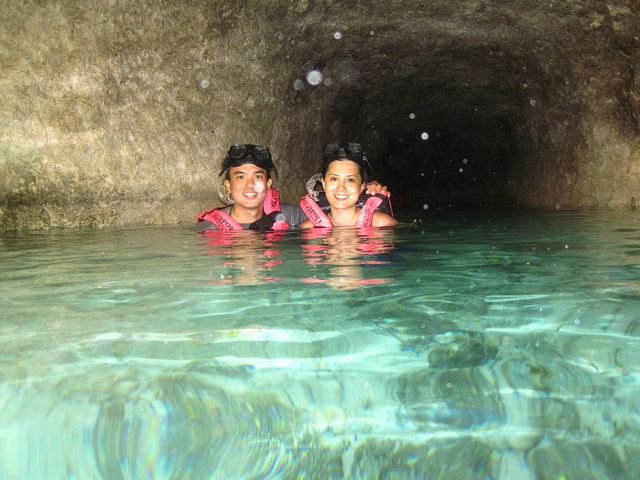 It was a one way journey you just follow where the water flows and leads you…It can be pretty scary to do this alone. It’s a 2 hour journey. Most of the time, you are swimming in pitch black environment… 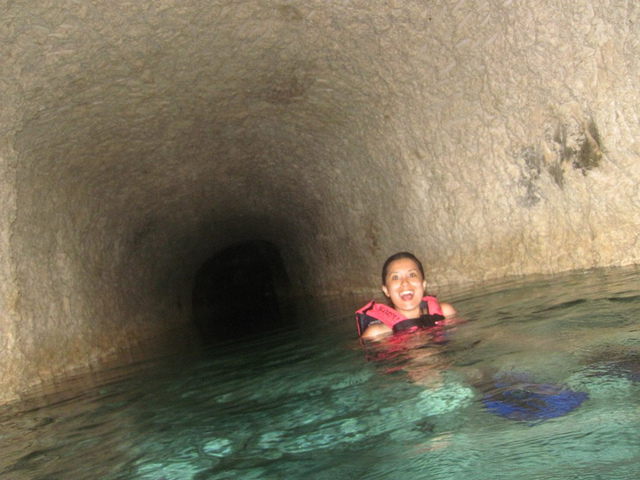 About to enter the dark unknown!

Floating on my back, this was the only source of light 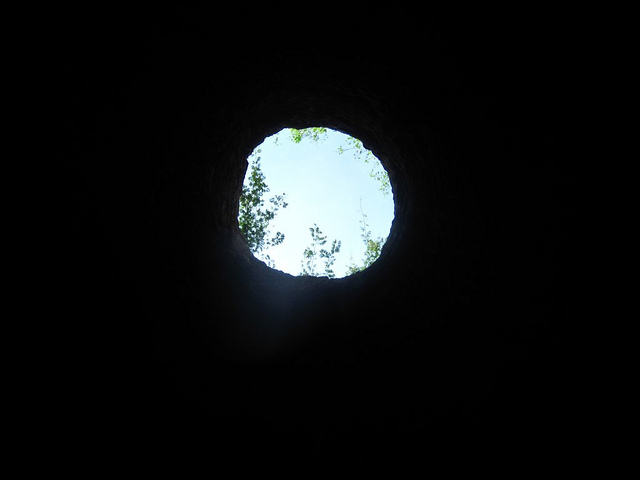 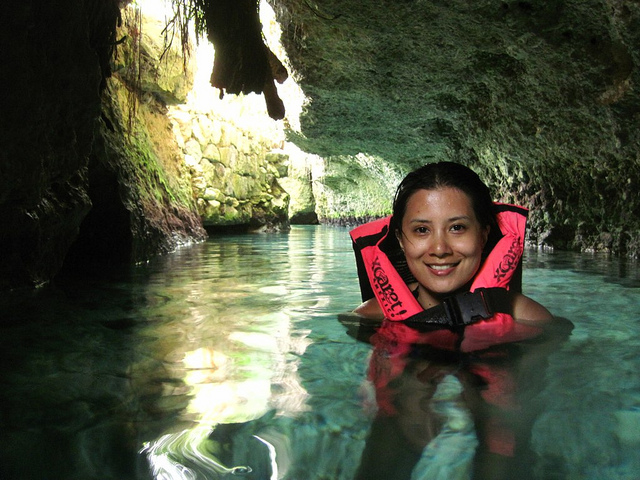 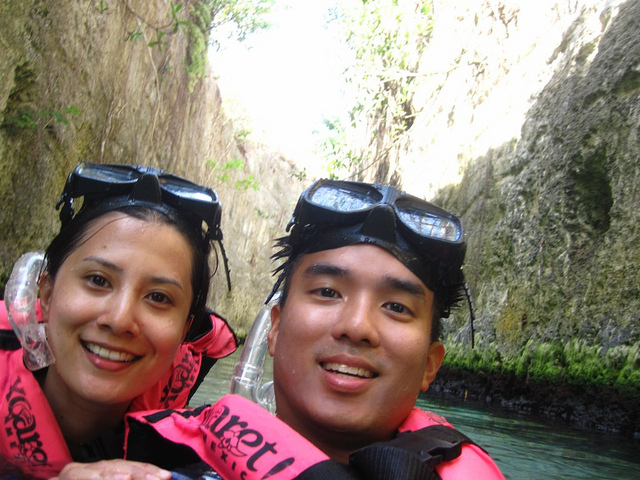 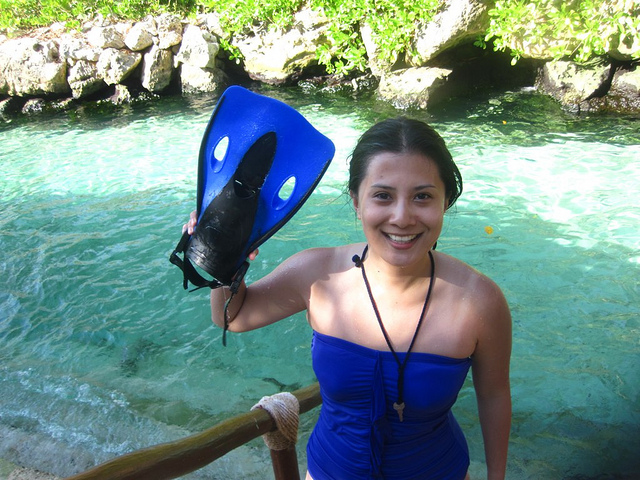 Success! After 2 hours, I finally reached the end of it.

Then it was time for the night show. 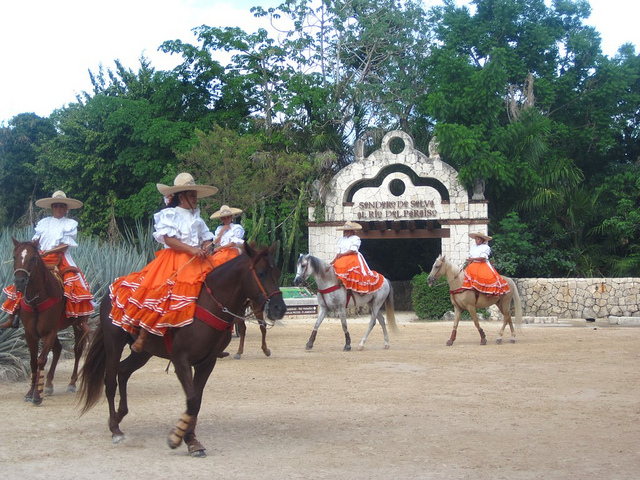 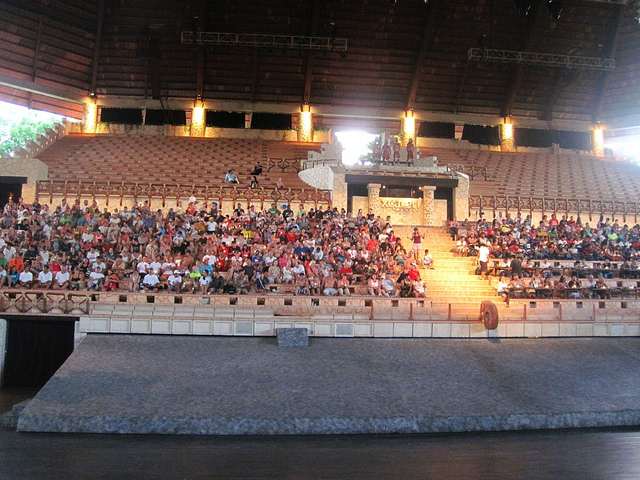 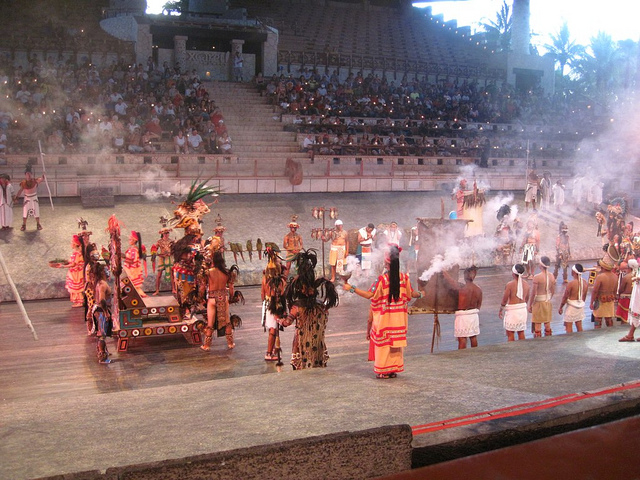 The show was about the history of Mexico, from pre-hispanic times (there was a Ball Game in the show) , up to the present. Such a colourful history not very different from the Philippines’.

Totally impressed with the show. It was such a huge production that they put on every night

I posed with some Mayan homies. They were cool. Except when I told them to make a scary face (to which they said Si, Si). They made gangsta signs instead. I guess that’s even more scary! LOL 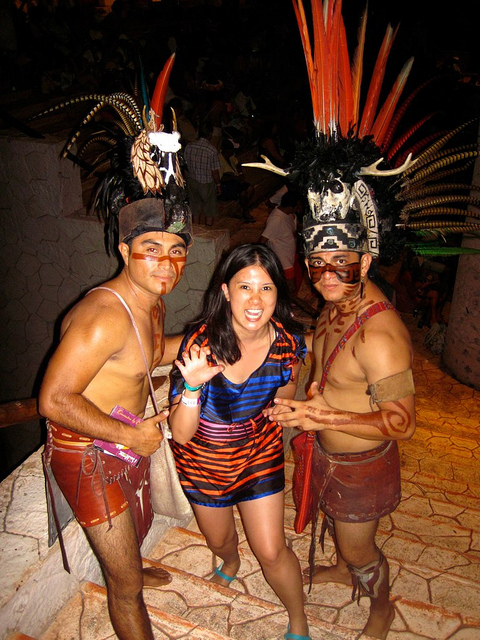 I definitely enjoyed Xcaret and would visit again if I have the opportunity. It’s the perfect place for people who like me love to be equally active and chillax! 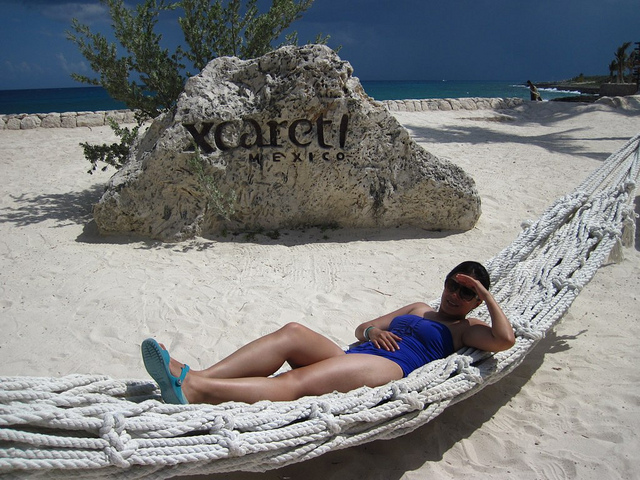