We drove 7 hours from Glacier National Park area down to Yellowstone. 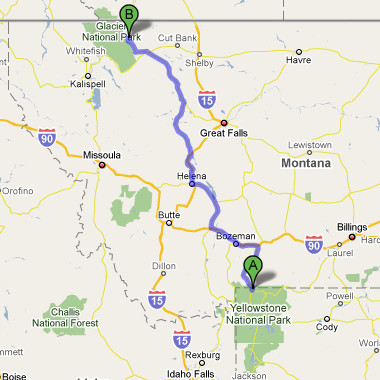 Still inside the state of Montana, but further south. Yellowstone actually is mainly in the state of Wyoming but a part of it extends to Montana). We just stopped in Bozeman to grab food. Reached Yellowstone about 5PM (will write a post about the accommodation soon) and stayed here for 4 days. 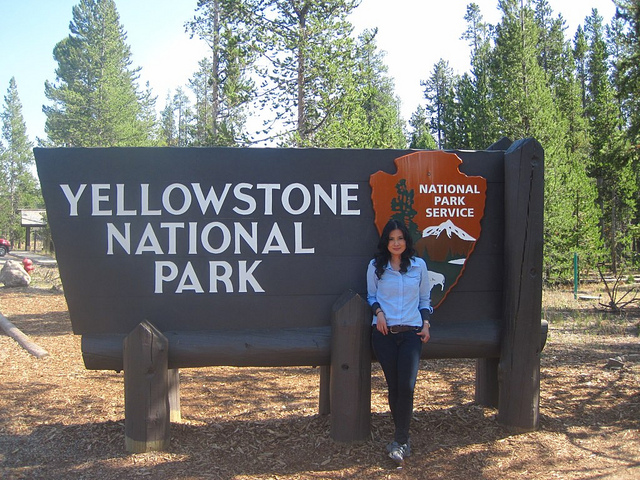 Yellowstone National Park contains about half of the world’s hydrothermal features , and there are about 300 geysers in the park , the most famous of which is Old Faithful.
In the early mornings there’s steam coming from the ground so visible and thick you’d think you are in a Spa country. 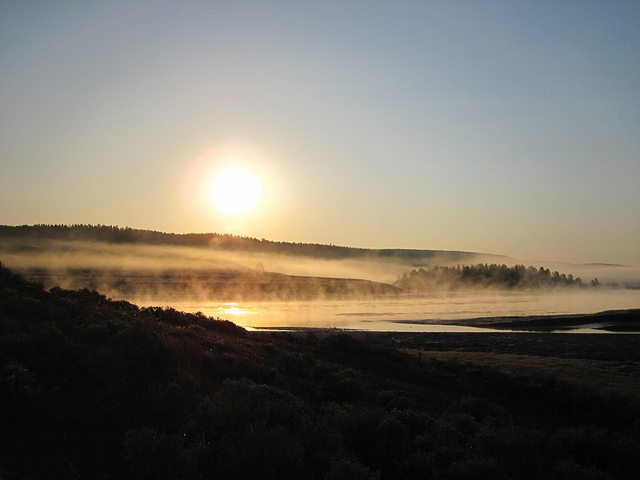 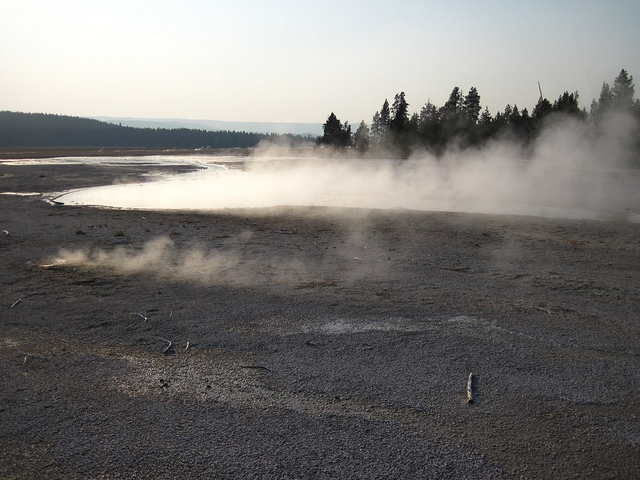 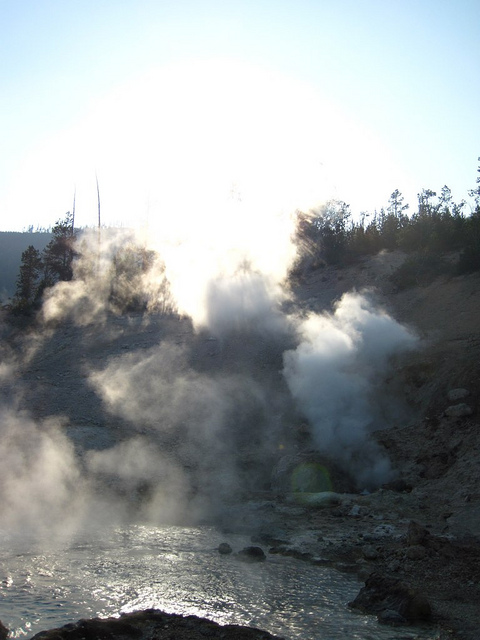 We were here early September and the mornings were pretty cold. The warmth of the steam can be quite comforting–though of course, the smell of sulfur reeks very strongly. (yes, like a million hard boiled eggs). I don’t really find the smell off-putting. I got used to it after a couple of days. The smell really sticks to your hair though. And you won’t notice this until you shower and wash your hair. 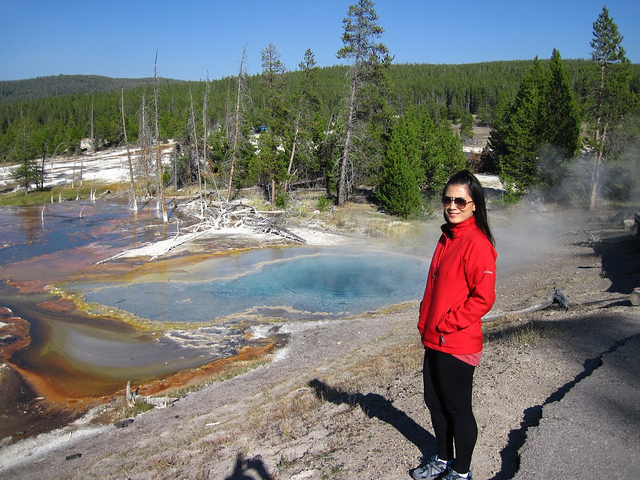 There’s a ton of geothermal pools of all sizes in the area. Some look very pretty and psychedelic in colours that it’s easy to forget it’s actually BOILING temperature (in case you get tempted to jump in) 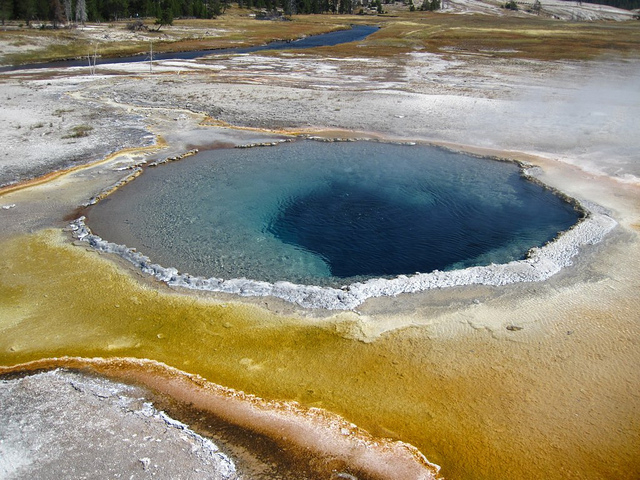 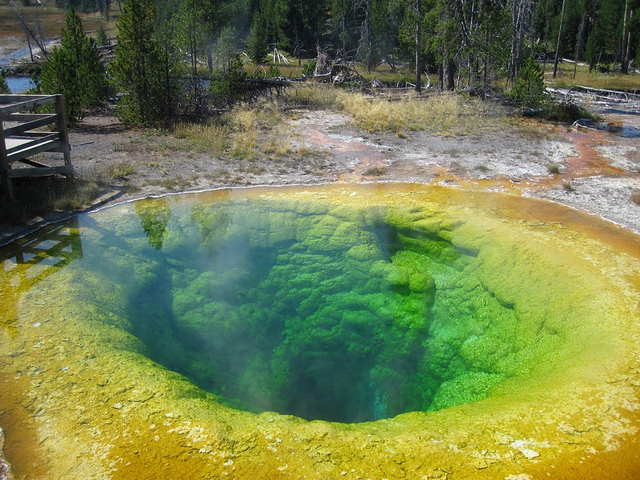 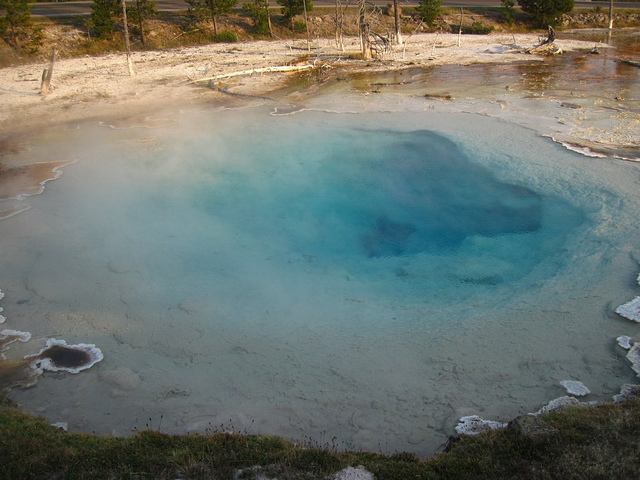 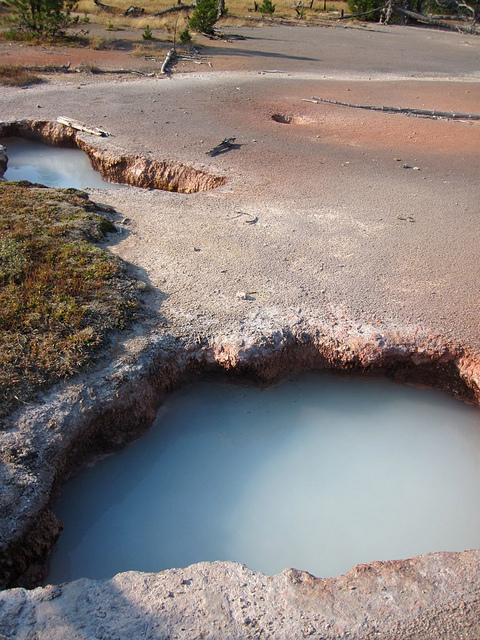 One of the more famous spots is Mammoth springs , and the area kind of makes me think of an abandoned civilization 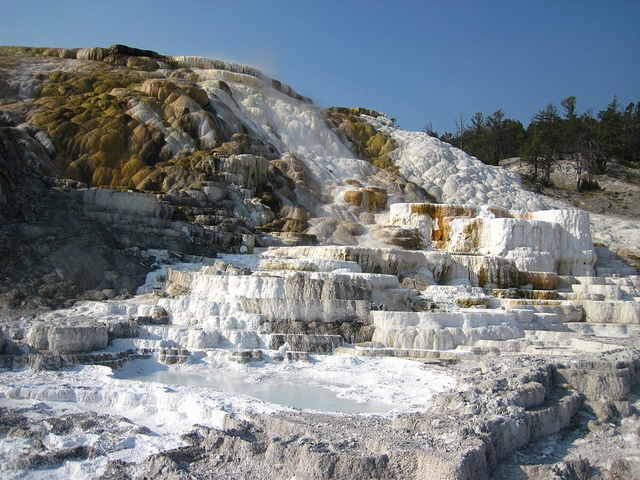 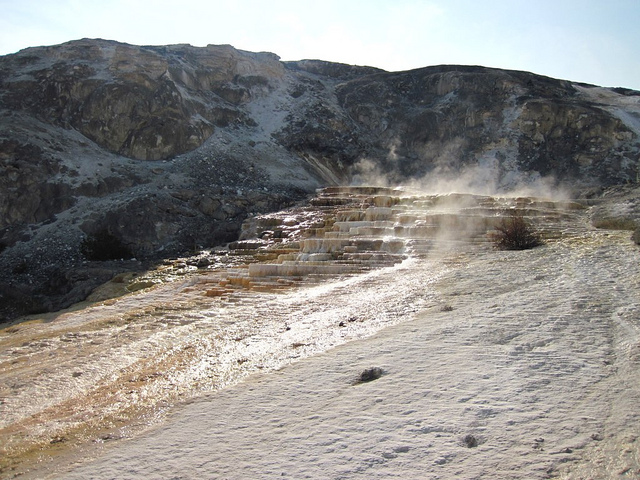 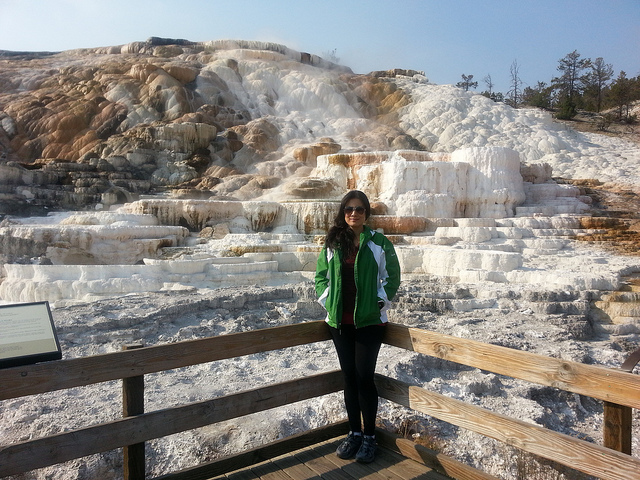 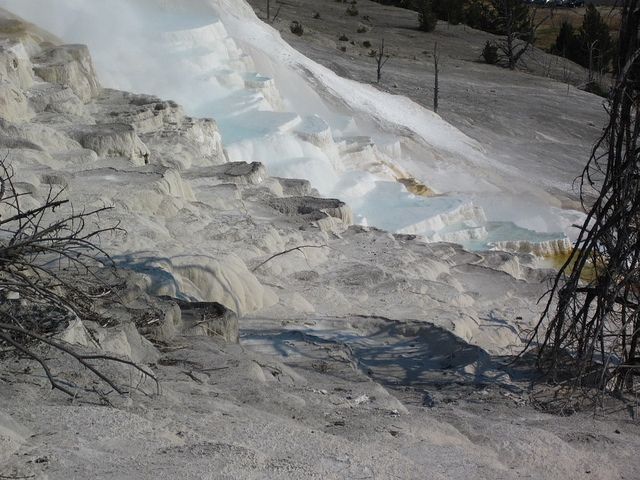 It’s a vast area of all white terrace-like formation (ok I’m sure there’s a proper scientific term for them), and because they’re so white and pristine it makes me imagine they are marble. (of course they are all natural formation) And I say abandoned civilisation because it was also disappointing to see that the springs have all almost dried up completely. There’s still a bit of trickling here and there, but not as flowing as it used to be.
Now on to the geysers. The first geyser we saw was “The Grand”-and honestly I don’t know why this is not as famous as Old Faithful.
This geyser was the bomb and you will see why.
There are time predictions/estimates on when certain geysers will erupt (and they are quite on time too). So it’s like a ‘show’ where there’s signs of “next predicted eruption will be at 1300”, etc. We heard that The Grand has a bigger eruption than Old Faithful so we hit The Grand first.
there were benches around the perimeter of the geyser , and we took the first row. 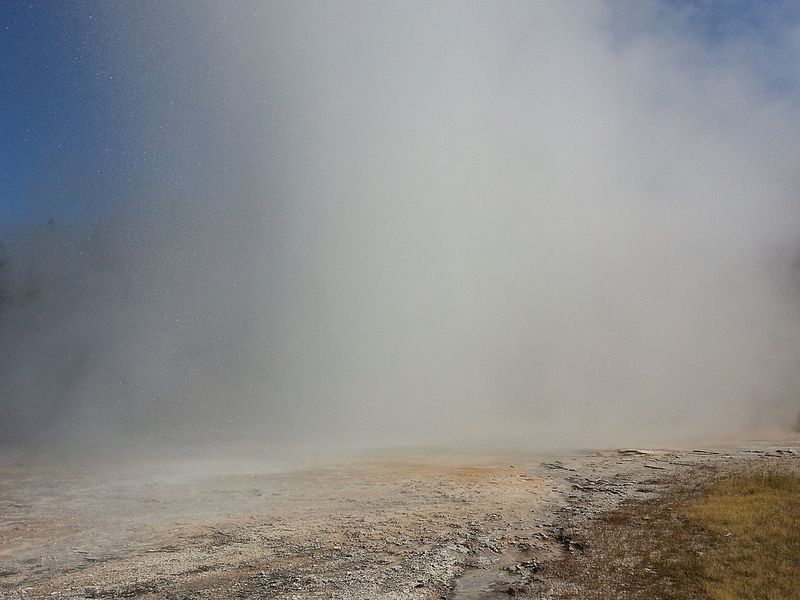 This was the last photo I took with my phone. It literally rained and poured sulfuric water everywhere. I ran towards the back row. People were drenched there too! I ran about 10 meters away. It still sprayed like crazy. I had to seriously run outside the area (about 30 meters distance) in order to escape the “target range”. If I didn’t have my 2 cameras and phone with me I’d be ok. But I had just started my trip, I didn’t want to carry dead cameras and phone for the next 5 weeks! 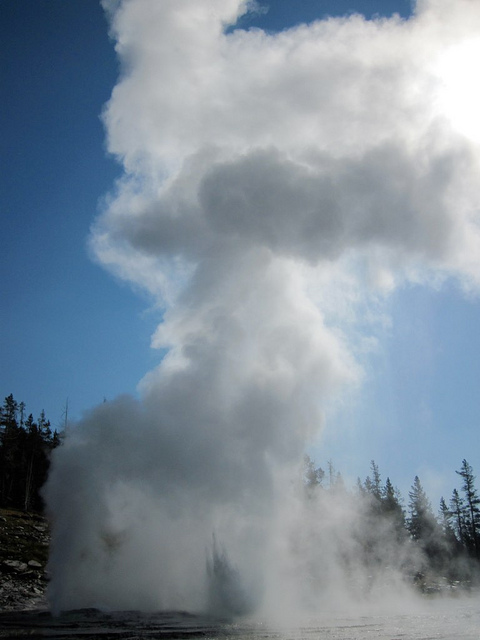 It wasn’t too bad for me though. All my gadgets are still ok. I feel quite bad for those who had carefully set up their nifty DSLR cameras with tripods. There weren’t any signs or warning that you may or will get wet. But that’s part of the fun I guess. 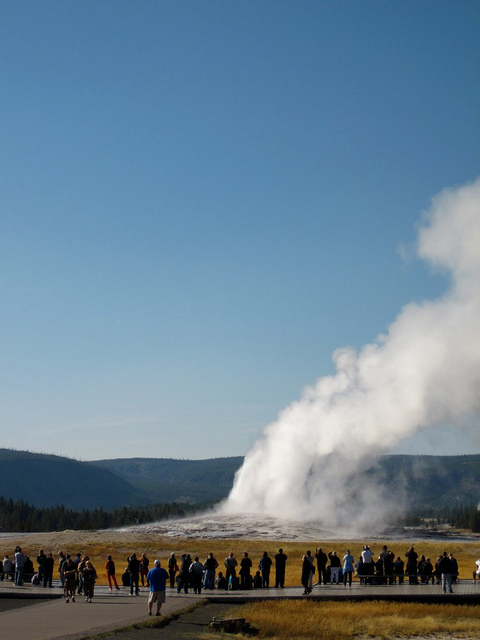 So this is good Old Faithful, the most famous and iconic one of them all. I hate to say this but after seeing and experiencing The Grand’s wrath and shower, Old Faithful seemed anti-climactic in comparison. Yet there were far more people watching it.
So my tip is to go to The Grand! I think that is the more authentic geyser experience between the two. Make sure you don’t miss it. It will be disappointing if you just saw Old Faithful and not anything else.
Overall I have to say that this part of Yellowstone (geothermal activities) didn’t really interest me that much. Sure they are amazing activities of nature but I won’t go back there just to see that. Don’t let this deter you though. I’m not one who is overly interested in earth science, but if you are a geological enthusiast, then I definitely would suggest for you to go check them out.
What I did find amazing (like jaw-dropping cray-mazing) in Yellowstone though, is the wildlife, which will be on my next post.