Also known as, “The day I had my Inigo Montoya moment.”

So first off, what’s with the Princess Bride character?

Well, today on the news, a Qantas passenger on board a Trans-Tasman flight was asked to remove his shirt that contained the words, “My name is Inigo Montoya. You killed my father. Prepare to die.” 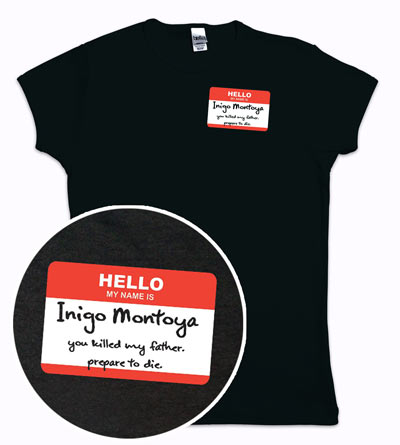 I find the shirt with the “Hello, my name is…” sticker concept clever and witty. But to wear it on a flight? NOT clever.

I grew up in the 80’s so I know the Princess Bride. I’m not a big fan of the movie or the book but I do get the shirt’s message. I know it’s not meant to be threatening to fellow passengers or to anyone at all.

But with all the crazy sh*t that happens around the world these days? I’d be thinking twice about wearing something like that.

One thing to remember is that not all of “your classics” are everyone else’s classics. (as some people’s opinion of the fellow passengers who’d been offended / threatened by the shirt is that they do not have a sense of humour)
It’s not because they don’t have a sense of humour. It’s because they don’t know The Princess Bride, more so Inigo Montoya. period. that’s all there is to it .

Majority of us grew up in the 80’s, (Gen X-er here) but we have to be aware that we are not that young anymore. Most of our acquaintances are a generation younger than us (90’s kids), who are oblivious to 80’s culture and who have “classics” of their own. (Clueless, Empire Records, etc) Even if you grew up in the 80’s , you could have your own set of classic-i-can’t-believe-they-don’t-know-it movies (Goonies, Indiana Jones, etc)

Ok, having said my piece on the subject….

..I am officially the pot calling the kettle black here. Because I, too have had my own version of a fashion statement security alert. Nothing as headline worthy as this Inigo Montoya incident though.

Back in 2007, I went to Brisbane for a short break.  I spent my last day there shopping. Now you all remember the “turban” trend back then? That looked so very chic on tall, statuesque Vogue models?

Yes, that was the last thing I bought in Brisbane (Sportsgirl, if you care to know). I was sporting a short bob haircut at that time so I felt very trendy and kinda quirky. I wore the turban right away and kept it on all the way to Brisbane airport, to catch our flight back to Canberra.

My extremely thick face and nerves of Blue Steel were fuelled more so by the fact that for some reason,  I was getting compliments left and right from random strangers. They must have been extremely polite, or one of those kinds who tell you , “You look…..nice.” When they actually mean, “You look weird.”

But yeah, I was on a high that afternoon, so thrilled to disprove my husband who was of the opinion that the turban made me look like a cancer chemo patient. “See? You just don’t get fashion”, I told him smugly, as an elderly lady just heartily chirped how lovely it was of me to bring back the 20’s.

When we arrived at Brisbane Airport, I was still on a turban high. Fellow passengers were (in my turbaned head) giving me the nod of approval. Boy, I felt oh so cool.

Then out of the corner of my eye, I glimpsed 3 heavy-set figures approaching. 2 Airport Security staff, with a Customs Officer.

Sweet Lord Alabama, am I really rocking it that good that even men who look like The Rock want to know where I got my latest fashion statement?

“Ahem. Um…”, one of them started uncomfortably. I was prepared to say, “Tell your girlfriends it’s from Sportsgirl. The new season!”

Then one of them said, “Excuse me, does your religion allow you to take that off in public places?”, pointing to my turban.

“Your uh, head piece. If it’s not against your religion, can you please remove it. It’s for airport security.”

Red in the face, I quickly whipped it off my head and gave it to them.

They then proceeded to put THAT thing, that flimsy thing, (which by now, limp and in the hands of a huge man, looked like a pair of underwear) under an X-RAY machine.

I was beyond mortified, and silent the entire time. My husband was suppressing his laughter, looking like he’s having the constipation of the century in the process. (I gave myself a mental note to do give him a reason to be constipated after this ordeal.)

“I actually don’t need that anymore. You can have it”, I told the Airport Security guy, preparing to walk away quickly.

“No, no no no no…hold it, we’re not done examining your article”

“You don’t understand. I don’t want it anymore. Can I just leave it here? I really need to go”

“Sorry, no. This is your property. We’re not keeping anything that’s not Airport property in this area”

After a couple more minutes, (which felt excruciatingly s-l-oow), a lady handed the turban to me and proclaimed “All clear”.

I snatched it away and walked as fast as I could to my gate. I was about to dump this horrible, horrible turban to the nearest bin. But my husband, catching up with me and laughing uncontrollably said, “no, no..please keep it…it’s for remembrance…”

I never , ever wore it again. I threw it away as soon as we hit Canberra.

Lesson learned: Just as I preached about Your classics may not be everyone else’s classics?
Not everyone is up to date with fashion statements. And not all fashion trends are wise. Or, secondary lesson, perhaps sometimes…. (a VERY select few times), husbands’ opinions on fashion do make sense.


HAVE YOU HAD ANY RIDICULOUS AIRPORT INCIDENT LIKE THAT? WHAT HAPPENED AND WHAT DID YOU DO??

DO YOU THINK AIRPORT SECURITY THESE DAYS ARE RIDICULOUS? OR DO YOU FEEL SECURE ABOUT TIGHT SECURITY DUE TO WHATS HAPPENING AROUND THE WORLD THESE DAYS?