When we went to Dublin in October for Tbex Europe 2013 (Travel Bloggers Exchange Conference), we only had a couple of spare days to explore the city. One of these days was spent in the countryside to see where the battle scenes of Braveheart was shot.

On the morning we arrived in Dublin, we were given a 3-day pass by Visit Dublin ( Dublin’s official Tourism board)

This pass enabled us free transport from the airport to the city (sweet!) and also allowed us free ride to any public buses, and most importantly, free ride to Dublin’s hop-on hop-off tour bus.

I am a strong believer that the hop-on hop-off bus is the best way to get your bearings around any city in the world. It’s what I always try to do on my first few hours in any city. And after that, I feel more confident exploring the streets on my own.

So we hopped on top of a bus on that cold and rainy afternoon.

That yellow arrow looked so inviting. And the phrase that beckoned us was Viking and Medieval history. Prior to us arriving in Dublin, Zombie and my mom had been watching the tv series “Vikings”. So we hopped out of the bus and immediately followed the yellow arrow directions.

The walk to the actual exhibit itself was quite picturesque.

The exhibit itself is located at the crossroads of St Michaels Hill, Patrick St, and High Street.  And it is connected to Christ Church Cathedral by a medieval footbridge.

It was a less than 10 minute walk, and soon we were welcomed by this hunk of a viking:

There are a total of 3 exhibitions in Dublinia. The first one is Viking Dublin, where the exhibit goes way, way back to when and how Viking settled in Dublin, which was originally called Dubhlinn, which means “black pool” 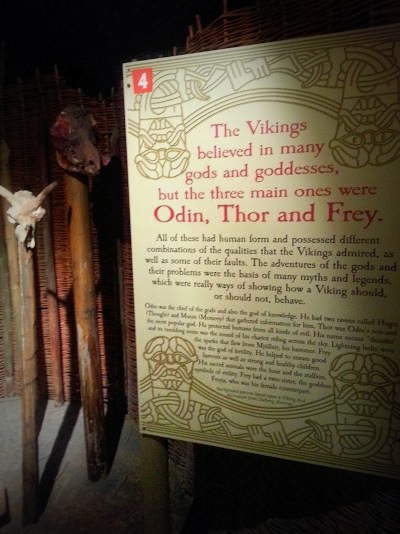 And this viking family custom gave my sister and I a chuckle.

It was interesting to see exhibits that showed how early settlers and Vikings lived their lives. From what a typical viking family house looked like , to their outhouse:

There was also a chart of the alphabet that the Vikings used, Runes. And I tried to spell out Holy Smithereens:

And the second level of the exhibit shows the Medieval age in Dublin:

Ned Kelly must have been inspired by this mask’s design.

And of course, no exhibit of medieval age is complete without the deathly plague:

This part of the exhibit can be a little creepy for kids, but this can be easily skipped for families with young ones.

The last exhibit shows what archeologists today are doing to unearth and study more about the life of Vikings.

You leave the exhibit via an annex to the Christ Church Cathedral, which in my opinion makes the experience even more interesting.