Ask anyone to describe the streets of Paris in one word, and chances are you will get either of these 2 answers:

From afar, Paris looks congested and grey. But Paris to me is a city that is more beautiful when experienced at a more in-depth level, and not just seen.

First base would be to experience it in a romantic splendour. And it did happen to me. That moment I first glimpsed the Eiffel Tower up close- the inevitable cliche of my breath being taken away truly happened.

But more than the pretty landmarks, I enjoyed playing in the streets of Paris. Yes, it is a romantic city. And yes, parts of it are dirty. Many times the streets reeked of piss and alcohol. But that’s how I got past first base. When I learned and accepted that Paris is both a city of beauty and reality.

I love how you can get lost and revel in the streets’ beauty one moment, and be guarded and streetsmart the next.

When we first set foot in the city at Champs-Elysees, I was greeted by 2 young girls asking me to sign for the society of hearing impaired children in France (or something like that). I read the folder presented to me, and Zombie watched the 2 girls like a hawk. I kept my hands to my bag too. And the girls just left. I didn’t lose anything, but I soon learned that it’s a popular modus operandi targeting tourists.

Same in Montmarte where, as we made our way to the Sacre Coeur, a group of men cheerfully greeted us, all carrying colourful strings and asking us to loop our hands inside the string. “It’s a magic trick!”, they say with a mischievous grin.

This one is pretty obvious. It doesn’t take rocket science for anyone to assume that the only magic trick happening in there would be your money disappearing. Who would readily volunteer to have their wrists semi-handcuffed and held by a stranger?

Having said all those close encounters above though, I found Paris to be such a huge playground. Yes, PLAY is my word for Paris. It’s not Romantic. It’s not Dirty.

Play. Paris plays hot and cold where one block  you could be vigilantly crossing the street just like any other citizen. (oh please do watch out for the cars!) And the next moment, you are basking in the playful atmosphere.

And there’s just something about the streets that despite some days being cold and rainy, it still manages to beckon and make you come out to play.

We encountered a street rally in Malesherbes one day. It was civilised , and I never found out what they were fighting for, but they were surely passionate about it.

I found that the key to enjoying Paris is striking that balance between play and reality. The Paris Metro for example, while it offers the most convenient way to get around the city, is also a place to keep your wits about you.

And whoever said that the Eiffel tower is for lovers probably has lost that wonderful sense of being a child.

Because the Eiffel Tower (and its surrounds), certainly made a kid out of me. 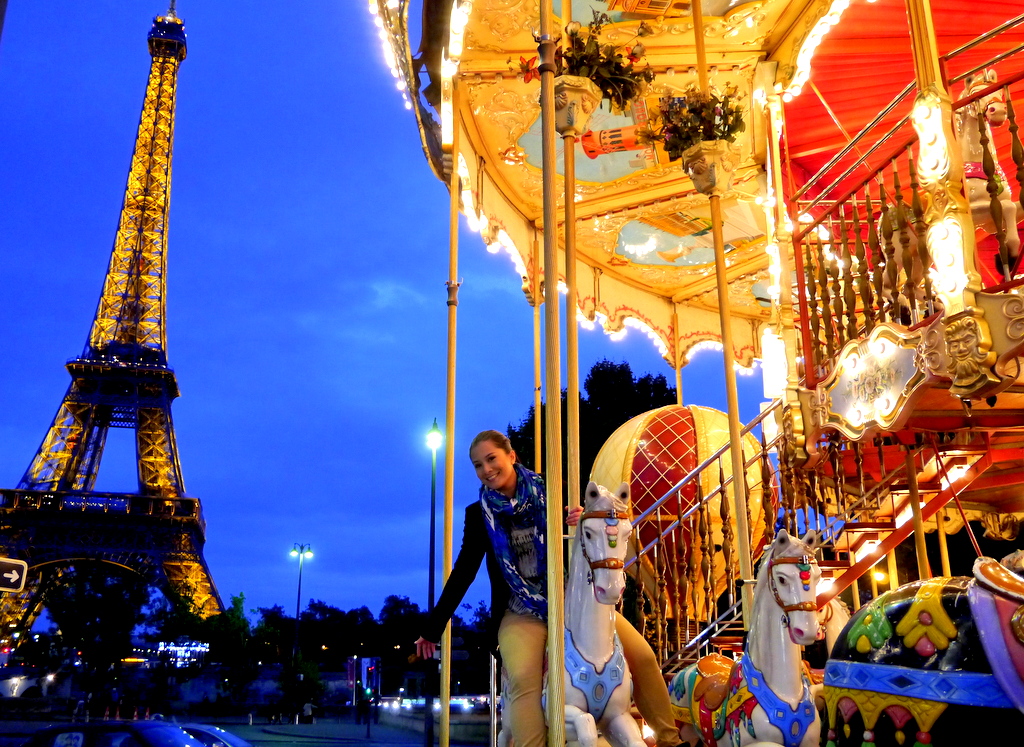 and in the grounds surrounding the Eiffel Tower lies this most ordinary looking carousel.

But its a carousel next to the Eiffel Tower! The bright lights called out to me, and when I lined up to purchase a token, the man in the booth scanned his eyes around (and below) me to see where the child is.

And that’s just the thing about Paris. It’s romantic, dirty, and magical. And knowing that Paris is a city that is a mixture of those, then she will start to play with you.

Let’s take as a last example, this grand majestic door somewhere in Marais. It’s such an ornate and romantic (there’s that word again) backdrop.

It is very tempting to descrribe just as what you see of it in first glance: a grand, ornate romantic door…

But is it, really?

Now on to you: WHAT IS YOUR WORD FOR PARIS?