“We have reason. It is the entire meaning and purpose of Shangri-La. It came to me in a vision long, long ago. I foresaw a time when man exalting in the technique of murder, would rage so hotly over the world, that every book, every treasure would be doomed to destruction. This vision was so vivid and so moving that I determined to gather together all things of beauty and culture that I could and preserve them here against the doom toward which the world is rushing.”

Not many people know that the group of Shangri-la Hotels was born out of inspiration from this 1933 novel.

And if you have stayed in at least more than 2 Shangri-la hotels worldwide, you would know that they really try to create a signature but personalised feel and service in their hotels that make a lasting impression.

I need not be as descriptive as James Hilton (who had vivid images of a man ‘exalting in the techniques of murder’), I can definitely say that all Shangri-la properties are a very welcome respite away from the usual busy life.

And so it was an absolute pleasure for me to stay at the world’s very first Shangri-la (opened 1971) during our weekend in Singapore.

Tucked away in the quiet part of Singapore’s Orange Grove Road, Singapore Shangri-la is a respite away from the busy city life, making this hotel a popular staycation choice for locals.

For those wanting to go to the city, there is a complimentary shuttle bus that departs every hour from the hotel to either Orchard station or Takashimaya Mall – the buzz places in Singapore where you should be if you want to go shopping.

There are 3 wings at the Shangri-la Singapore:

Tower Wing – the main wing of the hotel and houses all the deluxe and executive rooms. This is also where the Horizon Club rooms and Horizon Premier Suite is

Garden Wing – Resort style grounds and rooms, greenery, waterfall (artificial), and a koi pond. This is where CHI the Spa is. Perfect for the leisure traveller.

Valley Wing – the most exclusive wing for high-end and VIP travellers. The most basic room type is a deluxe, and it is all suites above that.

Shangri-la Singapore is known as an urban resort in the city, and I am quite confident that it is the Garden Wing that has brought the hotel this title. 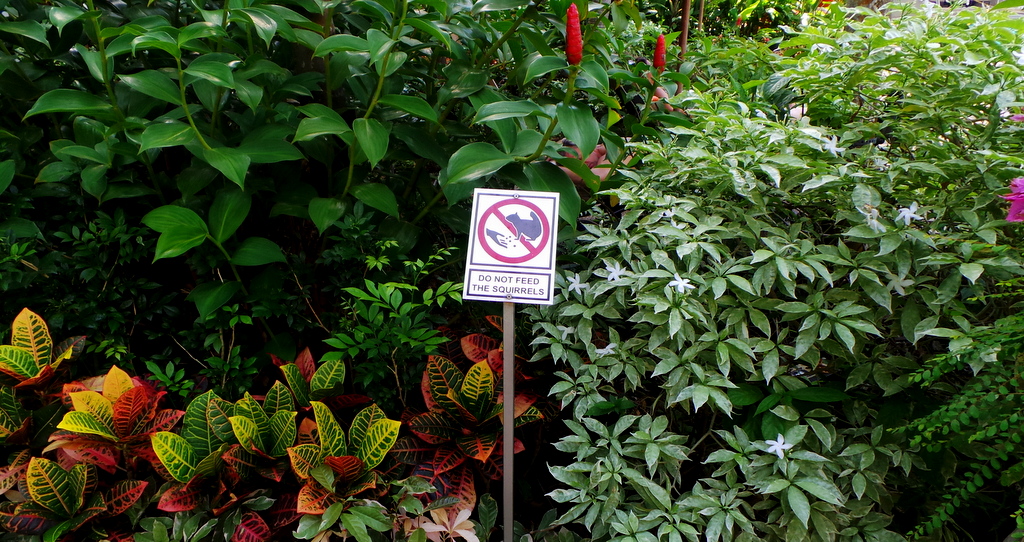 With lots of natural wood, a balinese interior and a very open balcony that overlooks the lush gardens, the room certainly had a very resort type of vibe.

I love the welcome tea in the room, a signature among mainly Asian Shangri-la properties.

Same concept as the Shangri-la’s Villingili Resort in the Maldives, (and I believe with other resorts of the Shangri-la group),  the air conditioning automatically switches off when the balcony door is opened (or even ajar). This will switch back on once the doors are closed.

The King sized bed was very comfortable and both sides of the bed had their own power outlets.

The bathroom was moderately-sized with the tub and shower separate. Bathroom toiletries are from Shangri-la’s house brand.

The balcony was very generously-sized, and this was where I espied my first Shangri-la squirrel.

The large size of the pool, along with the vibrant greens and trees of the hotel is definitely what gives the hotel a resort feel.

Situated next to the pool is  The Waterfall Restaurant. Open for breakfast, lunch and dinner, the restaurant has a Mediterranean specialty with colonial-style interiors.

Consistent with all Shangri-la brands, breakfast was indeed a highlight during our stay. The buffet breakfast had a wide variety of savory, sweet, European/Western , Asian, cold or hot breakfasts.

You can also order ala carte, or combine both, as I did.

It was a varied mix. Most guests at the Garden Wing where we stayed were families and couples. The Tower Wing were mostly groups or larger families (in number and also in age) and solo business and VIP Travellers at the Valley Wing.

We stayed during the weekend when it was understandably busy and the staff handled the full house with a no-nonsense efficiency whilst maintaining a friendly demeanor.

The doormen’s uniform, which emulates the Tibetan warrior – is the only uniform that has withstood 40 years without being modified or changed.

This definitely brings a unique wow factor especially when first arriving at the hotel.

Having  been to Singapore previously, I appreciated the fact that the hotel’s location is away from the hustle and bustle. And though there is a shuttle to the city that runs every hour, those who want to just walk around on their own, at their own time, will need to consider this beforehand. Having said this, the nearest mall can be reached by a 15-minute walk.

I can definitely see why the Shangri-la Singapore is popular for staycation weekends. As James Hilton had originally described it, the purpose of Shangri-la is, in a nutshell, to gather all things beautiful in order to prevent the world from hurtling to its doom. Though not quite as dark and morose in description as the novel, this is what the Shangri-la in Singapore served as – a quick escape and relaxation from the busy city life.

How do you like to relax in the midst of chaos? (my answer – spa, hands down!)

We stayed as guests of Shangri-la Singapore, however all views and opinions are my own.