The years 2014-2018 sees a world-wide commemoration for World War 1 and for Australians worldwide, the Anzac Centenary will be one of the most significant commemorations to take place in the lives of current generations.

Celebrity Cruises recently had a commemorative Anzac Day cruise around the Mediterranean , stopping at Canakkale (the port in Turkey to get to Gallipoli) on the 25th and 26th of April.

I joined this 12-night cruise that departed from Rome (Civitavecchia). From there we headed to Canakkale in time for the Anzac Anniversary on the 25th of April. (Video at the end of post)

This was my first time to both go on a cruise, and also to visit Gallipoli. Needless to say, I was quite excited and also very curious as to how this trip of many firsts will pan out.

The spirit of Anzac was very much alive and felt in the cruise.

The first 2 days of the cruise were “sea days”. It means the entire 2 days were spent sailing. After all, it is quite a long way from Civitavecchia (Rome) to Canakkale (Gallipoli).

These 2 days were filled with activities that were mostly related to ANZAC.

First, there was a 2-part presentation / lecture given by Dr Peter Donovan, a historian and World War I & II author.

The first part was called “Forging the ANZACs”– a background to the Gallipoli campaign, why the Australian and New Zealand forces invaded the peninsula, their responses to war and voyage to Egypt.

It was a full house and many were standing as it was very informative, and provided a good background to those who were not familiar with the ANZACs (there were also a lot of Americans in the cruise) but were interested.

After lunch, the 2nd part of the lecture continued, “The Landing and it’s Aftermath”, where Dr Donovan narrated the fate of the whole campaign.

It was quite surreal to be hearing and learning about the ANZACs while knowing that the ship, Celebrity Constellation was moving closer to Anzac Cove as the lecture occurs.

One afternoon, there was also a Haka (traditional Maori dance of New Zealand)  and Australian Bush dance class held by the poolside.

On the eve of ANZAC day, the 24th of April, there was a live telecast of the Dawn Service in Canberra. ( Turkey is 7 hours behind Australia)

And on the 25th of April, at 05:30 AM, there was also a live broadcast of the Dawn Ceremony from Anzac Cove itself shown at Celebrity Theatre.

At 07:45 AM that day, almost everyone was up early to attend the Celebrity Constellation ANZAC Ceremony at the Poolside.

After the ceremony, there was also a mini mid-morning barbecue grill by the pool that’s very Aussie style.

And lunch time at the Oceanview Buffet was a pleasant experience. The desserts were very ANZAC / Aussie themed. On every dessert station (there were at least 4!), were 2 Australian and New Zealand cakes, and there were also desserts like Anzac biscuits, profiteroles, lamingtons, pavlova and other Aussie treats.

While we were already docked at Canakkale port on the 25th of April, we were advised by Celebrity Cruises to schedule our excursions the next day on the 26th of April, simply because there were just too many visitors in Gallipoli on the 25th. There were other cruise ships docked in Canakkale, not to mention visitors that are local, and those who would have flown in.

I booked an excursion with Celebrity Cruises for the 26th of April while docked at Canakkale. It was the Panoramic Highlights of Gallipoli and it entailed crossing the Dardanelles via a ferry to cross from Turkey’s Asian side (where we were docked), to the European side where Gallipoli / Anzac Cove was.

Along with other Celebrity Cruises guests, we boarded a tour bus, and this tour bus took us to the port of Dardanelles, where the buses drove straight into the ferry to cross.

Upon crossing the Dardanelles, our first stop was Kilitbahir Castle, a fortress on the west side of Canakkale. Built in 1452 by Sultan Mehmet II the Conqueror.

Sultan Mehmet the Conqueror built this to prevent the Venetians from conquering Constantinopole.

Now, it is still a remarkable fortress but remains quiet with a steady flow of visitors, most of whom arrive during the ANZAC Anniversary period.

Our second stop was the Canakkale Martyrs Memorial, or what is also known as the Turkish (side) Memorial.

This exemplifies and brings to life the saying that “in war, there are no victors, only losers.”

It hadn’t even occurred to me that there would be a Turkish side of memorial to the Gallipoli wars (as I am only aware of ANZAC Cove), but it does show that in war there are always two sides, and these two sides will always have loss of life.

Our last stop was Anzac Cove, and I’m so glad that I heeded Celebrity Cruise’s advice to head out on the 26th of April (instead of the 25th). It was definitely less crowded, and though the platform for the ceremony was still up, the overall mood was very solemn and reflective.

The coast was very “normal-looking”, if one didn’t know the tragedy that occurred in these shores a hundred years ago, you wouldn’t think there’s anything more to this than a rocky shore.

Our guide told us that there are still warships underwater not too far from the shore.

Returning back to the ship proved rather tricky because even if the visitors have died down on the 26th of April, overall there were still a lot of visitors in Canakkale during this period.

As there was only one port that allowed ferries crossing back and forth between the Asian and European side of Canakkale, we were stuck in heavy traffic. We were late arriving back to the Celebrity Constellation however, this is where the convenience of booking the excursion through Celebrity Cruises comes in handy. We were scheduled to leave the port of Canakkale at 1700 (5PM), but we only arrived around 17:15 . If you have booked the excursion through Celebrity Cruises, the ship will not leave the port unless the guests booked on their excursions desk have returned.

You can also choose to book your excursions independently, but you are pretty much on your own to ensure you get back to the ship on time.

Here’s a video clip of my experience : 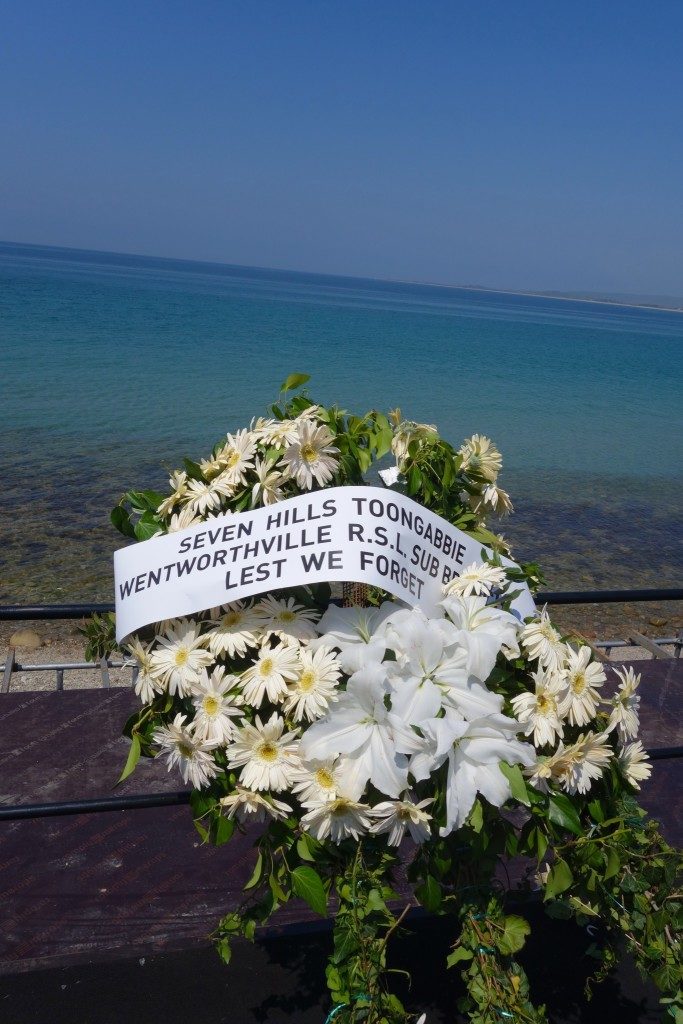 Have you been to Gallipoli before? Would you ever consider cruising the Mediterranean on an ANZAC Commemorative Cruise?