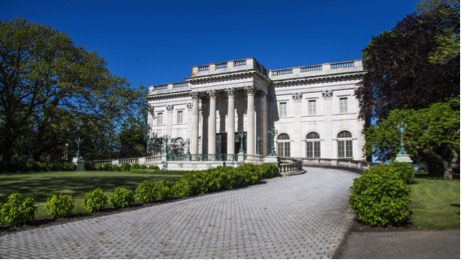 The Newport Marble House in Newport, Rhode Island is one of the state’s most popular attractions. Its construction began in 1888. It is a Gilded Age mansion that was completed in 1892. The manor has 50 rooms. At the time, it cost around $11 million to build. Due to its size, in today’s dollars, it would cost $260 million to build.

The front of the Newport Marble House has an architectural design similar to the White House in Washington, D.C.

The Newport Marble House was designed by Richard Morris Hunt. The house was built as a summer cottage for Alva and William Vanderbilt. William chose to have the house built for his wife for her 39th birthday. In 1895, just a few years after the construction was complete, William and Alva were divorced. After the former couple got divorced, Alva sold the house to Frederick H. Prince in 1932.

The house became a landmark, both socially and architecturally, of Newport. It helped to change the area from being quiet to resort-like. The area was previously filled with wooden houses. With the building of the Newport Marble House, the area shifted over to ornate buildings made of stone. In 1963, the Preservation Society was able to get the house from Prince’s estate. In 2006, the Marble House was designated as a National Historic Landmark in the United States.

Here are 5 facts that you didn’t know about the Newport Marble House:

1.)The house is made of more than 500,000 cubic feet of marble. At the time, this cost $7 million. As mentioned, the whole project cost about $11 million, so most of that money was spent on the marble inside of the home. Much of the home is made from marble, which is why it was given the name of the Newport Marble House.

2.)The house features more than just the marble accents, which have given it its name. In addition, there are marble sculptures to look at throughout the house. These marble sculptures add a lot of interest to the Newport Marble House and can help visitors to appreciate the artistic style. The architecture and paintings on the ceilings are also beautiful accents. This is all based on historical architecture and inspiration from France. The designer included plenty of marble in the home in a variety of spaces.

4.) The house also features pink Numidian marble. This marble was popular in Ancient Rome. Contrary to popular belief, a wide array of marble colors was used in Ancient Rome. This marble is also found in northern Africa. Numidian marble comes in cream, yellow, pink, and red. In the Newport Marble House, the pink shades of the marble were used alongside the yellow siena marble.

Today, the Newport Marble House is a popular tourist destination. It is open for tours so visitors can appreciate its history and beauty, according to Lyhpa. Tourists can explore the mansion on a self-guided tour. This allows visitors to move along at their own pace. They can take it all of the beauty and architecture in the building. Visitors are encouraged to take a look at both the interior and the exterior of the ornate mansion.

The Newport Marble House has many historical and architectural features that draw visitors in. It has been recognized for its importance throughout history. It is often recognized for its 500,000 cubic feet of marble. Its French-inspired style also adds to the interest visitors have in the mansion. It is unlike other structures in the area of Newport, Rhode Island.